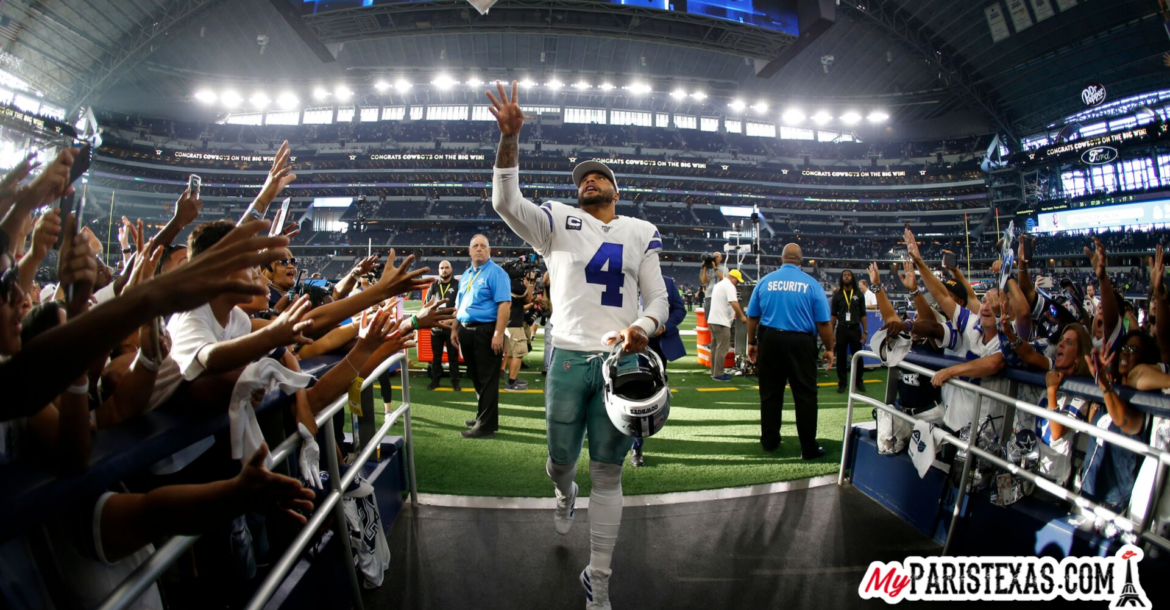 LANDOVER, Md. (AP) — The same day one quarterback passed for 405 yards and four touchdowns, another threw for 380 yards and three touchdowns.

They’ll meet Sunday, but couldn’t be in more different positions. Dak Prescott is on the verge of a contract extension with the Dallas Cowboys that could guarantee him over $30 million, while Case Keenum is a temporary placeholder for the Washington Redskins until first-round pick Dwayne Haskins is ready.

Prescott leads the favored Cowboys into the Redskins’ home opener fresh off a perfect 158.3 QB rating in a Week 1 rout of the New York Giants that took pressure off running back Ezekiel Elliott.

Owner Jerry Jones called a new contract for Prescott “imminent,” but the fourth-year signal caller is focusing on Washington and not looking back.

“I’m so on to the Redskins at this point that I’m off of that game,” Prescott said. “You can’t sit back and hang your hat on something like that or hang your hat on one game. It was a good performance for us to go out and do that in the passing game, obviously win that game the way that we did, but it’s about turning the page.”

Prescott faces a defense that could be without lineman Jonathan Allen, weakening a front seven that should’ve been able to put more pressure on the pocket than the Giants did. Washington struggled at that against Carson Wentz, too, when Allen left with a knee injury, and getting to Prescott is the only way to keep him from throwing wild.

“You stand back there in the pocket all day and go through your first, second and third reads and come back to your first one, OK, cool. Anybody can do that,” Redskins cornerback Josh Norman said. “At the end of the day, he’s been playing well. As you can see, he’s evolved. He’s growing in the system. He’s just taking his keys and picking his targets and throwing the ball on time.”

Keenum found tight end Vernon Davis for 48 yards and rookie receiver Terry McLaurin for 69 yards on touchdown passes in the 32-27 season opening loss . He was largely done in by a lack of an effective running game, which will look very different this week with Adrian Peterson back from a healthy scratch and Derrius Guice on the shelf after knee surgery .

“I don’t think we skip a beat with whoever is in there,” Keenum said.

The Redskins are expected to have Jordan Reed back after their top tight end missed the opener with a concussion. Washington put Reed insurance J.P. Holtz on waivers and lost him to Chicago, and Reed is trending toward being in the lineup Sunday.

“Obviously, he’s been a great player for them for a number of years,” Cowboys coach Jason Garrett said. “He’s a mismatch player in the passing game. He’s just really hard to cover and can run a variety of routes. He can beat you in a lot of different ways. So he’s a great challenge.”

Elliott says he’s ready for a “normal workload” after getting about half of the touches he’s used to in the opener. The two-time rushing champion missed the entire preseason in a holdout. His first practice was four days before the 35-17 win over the Giants, the same day he signed a $90 million, six-year extension.

Elliott, who averaged 25 touches per game his first three seasons, had 13 carries for 53 yards and one catch for 10 against New York. He tried to stay in shape in Mexico during a holdout that ended on its 41st day.

“There is a difference between going out there running around and not being hit and then being hit and having to come back and do the same things,” Elliott said. “So being hit takes a little more out of you. But I think I’m good.”

The Redskins will be without Trent Williams yet again as the starting left tackle’s holdout continues. Peterson, who co-owns a Houston gym with Williams, didn’t get a chance to see his good friend last week but has stayed in touch.

“I wish I would see more of him,” Peterson said. “I’ve talked to him, but it wasn’t even about football. Just life, checking in, what he had going and a couple things around the gym, but that’s about it.”

The Cowboys had four defensive starters miss all four preseason games while also getting limited work in practice. Each played less than half of the opener, led by star DeMarcus Lawrence (shoulder surgery) at 46% of the snaps.

Fellow defensive end Tyrone Crawford (hip injury), cornerback Byron Jones (hip surgery) and linebacker Sean Lee (knee injury early in training camp) are the others easing their way back, with the Cowboys having to decide how much more playing time they get.

“I don’t feel like I’m still all the way back,” said Lawrence, who had half of Dallas’ only sack of Eli Manning. “It’s so much that comes into this game that you have really go through the drills every day in order to get the feel for it. Feel like I’m getting my legs back underneath me, but it’s still not good enough yet.”

Even with limited carries, Elliott is helping the passing game with his presence. Prescott had five completions of 25 yards or longer involving four receivers against the Giants.

Michael Gallup, who had career highs of seven catches for 158 yards, was the only one of the four without a touchdown. But the second-year player was also the only one with multiple catches of 25-plus yards, including the longest at 62 to set up Elliott’s 10-yard touchdown.

Amari Cooper had a 45-yard catch and a 21-yard TD, while Randall Cobb (25 yards) and tight end Blake Jarwin (28) were wide open on their touchdowns.

“I think that’s like a defense’s worst nightmare when everybody is making plays,” said Cooper, who had 106 yards on six catches. “How can you game plan against that? How can you make adjustments? What are you going to do?”