Sixteen years ago today, Nolan and Noah LaRue were born. Three years later, on the same day, Mason LaRue was born. A set of identical twins and a younger brother share the same birthday; a 1 in 133,000 chance. 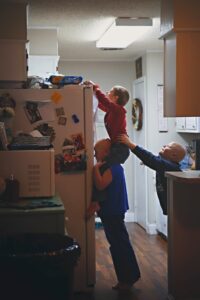 Kristin LaRue, the mother of the three boys, said they “have never minded sharing a birthday,” because, “they’re all three super easy-going children.”

“It’s basically a second Christmas around here,” LaRue said in reference to the boys’ birthday party. “I think it makes it easier on everyone for them all three to have the same birthday; it’s easier to plan and do things as a family.”

She said celebrating their birthdays on the same day is also easier considering they’re all boys.

“When they were younger and had the big themed birthday parties, I would think how chaotic it would be trying to plan a Spiderman/My Little Pony party at the same time,“ LaRue said. “As they’ve grown older, their shared birthday has of course gotten more expensive on me and their daddy; sets of lego blocks were way cheaper than PS4s, ya know?”

Sixteen years ago, after being on bed rest for about 17 weeks, LaRue said the twins were born six weeks early.

“It was a really hard pregnancy and my poor body couldn’t hold them in any longer,” she said in reference to the twins’ birth. “Mason was born three weeks early but was around 10 pounds at birth. So I think we had his due date just a tad off.”

When LaRue went into labor with Mason, her now 13-year-old son, she was icing cupcakes for Nolan and Noah’s birthday party they had originally planned for the following day.

“We ended up having their birthday party in the delivery room at PRMC since everyone was there already,” LaRue said.

She and Jeremy, her husband – alongside everyone else – thought it was crazy Mason was born early, on the twins’ birthday.

“It’s like they each decided to be born on May 6th. With both pregnancies, I went into labor on Cinco de Mayo and each babe was born the next day, so maybe they all three just like a good party. Luckily for our pocketbooks, we haven’t celebrated Cinco de Mayo with Dr. Vaughn and the staff of Paris Regional Medical Center in over (13) years now.”

Hundreds gather for Rededication Ceremony of 1888...