Paris’ very own Paris 6u All-Stars team is headed to the state tournament as the first T-Ball team from Paris to win regionals and is looking for community support to cover uniforms and hotel stay for each child.

“These kids are ball crazy,” said Head Coach Bronson Brown “We’ve had a very successful season so far, being undefeated in any of the all-star tournaments we’ve played.”

When the team won regionals, “they were as excited as a group of kids could be.

“I’m definitely excited to see them get this opportunity that they’ve earned,” he continued. “This is an opportunity that many great teams with talented ball players work toward, but never experience.”

The team is expected to play in the state tournament in Longview, Texas, between July 16-18. Money donated to sponsor the team will go directly toward tournament expenses.

“These boys are special, and I hope that their early success on the ball field can help each of them recognize their potential and give them the confidence to succeed in all aspects of life,“ Brown said.

Brown said the team has already seen a “great response from the community and Paris Optimist Club,” and hopes to raise enough money from sponsors to help alleviate financial burdens from parents.

“We are trying to raise enough support to cover new uniforms and the four-night hotel stay for each kid,” Brown said. “Since parents are having to take off to make the tournament, we want to minimize the financial impact as much as possible.”

A sponsorship of $300 or more will get a business name displayed on a banner taken to state, “and hopefully on to the World Series where we will represent Texas.” 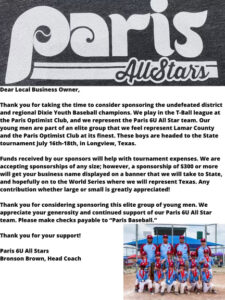 Walk with a Doc Halloween Special to Take...