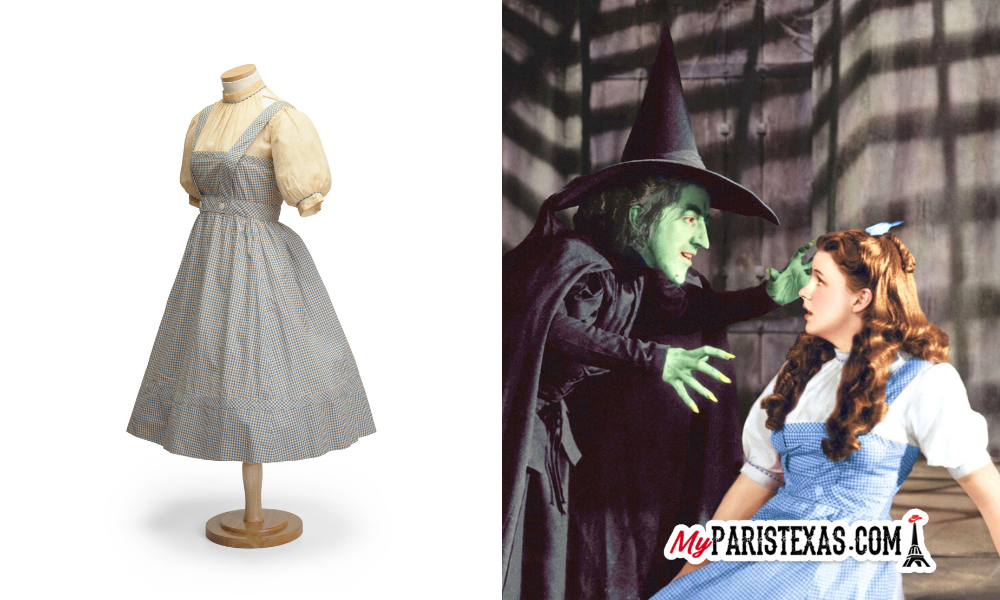 The iconic blue and white gingham pinafore dress worn by Judy Garland as Dorothy Gale in The Wizard of Oz, will hit the auction block next month and is expected to sell for $800,000 – $1.2 million.

According to a press release from Bonham Auction House, the dress was worn throughout the scene set in the Witch’s Castle when the Wicked Witch of the West has captured Dorothy and threatens her with death.

The dress, which will be auctioned on May 24, is one of only two complete costumes with both blue and white pinafore dress and blouse known to be in existence, and one of only five version of the dress made for the film known to be extant.

Although there has been much speculation, it is unknown how many dresses were in fact made for the film or for publicity purposes but, following extensive study of the film and examination of the distinctive and varying patterns of the blue and white gingham on the bodice of the dress, it appears that perhaps only five blue and white dresses are seen in the final version of the film.

Since the 1970s, when Father Hartke took custody of the costume, the dress has had a checkered history. There are numerous photographs of Father Hartke with the costume in the 1970s and early 1980s. During that period, it seems that a student fan of the movie snuck into Hartke’s office and snipped a small section of the reverse of the dress as a keepsake. When Father Hartke retired in 1986, the costume passed to successive Drama Department Chairs before going missing in the late 1980s. Despite many searches at the University over the intervening years, it was presumed lost.

During the pandemic, a retired Drama Department professor discovered the dress while going through boxes from his former office. In July 2021, the dress and a note from the professor – ‘I found this in my office’ – was discovered by staff preparing the Hartke Theater for renovations.

The costume is now being sold to benefit the Department of Drama, as McCambridge had originally intended.