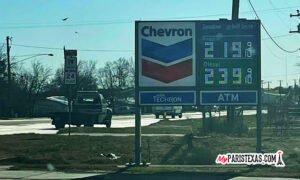 Gas prices have begun to increase as prices exceed $2 throughout the state. Some areas of Lamar County are seeing prices at $2.09 and $2.19. For the first time in nearly 11 months has there been an average of more than $2.

Drivers in the Paris area are spotting prices at an average of about $2.07, according to GasPrices.aaa.com.

“Gasoline has been on the rise for the last few weeks due to higher crude oil prices,” said AAA Texas spokesperson Daniel Armbruster in a press release. “However, demand for gasoline remains lower than this time last year, which could result in lower gas prices in the weeks ahead as winter sets in across the country.”