Five of the six patio sets in Downtown Paris stolen over the weekend, community left disappointed

The Paris Downtown community is left disappointed after five sets of patio furniture were stolen from the square over the weekend.

“Definitely this is disappointing as these were the property of the community, and meant for the public enjoyment of all our citizens and the attraction and beauty of our downtown,” said Paris Main Street Coordinator Cheri Bedford. “At any given day you could see them being enjoyed by our citizens and visitors alike.”

Paris Police Chief Richard Salter added the person who stole the furniture on Friday at about 5:30 p.m. was a white female, driving a 2011-2016 model silver/grey-colored Hyundai Elantra. 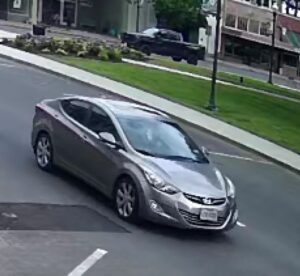 “If the public can identify the female driver or license plate of the suspect vehicle, please contact Paris Police Detective Forest Bigler or Captain Danny Huff at 903-784-6688,” Salter said.

The sets stolen ranged from $120-$175 each, which included the tables and chairs together.

“Several of the downtown merchants have offered to purchase new sets. So many merchants are working with the city to make the downtown the wonderful place it is,” She said.

At this time, Bedford said, they plan to wait on the outcome of the police investigation, and if the stolen property is returned, “then the problem is solved.”

“Please return the table sets as they belong to all of our citizens and is meant for everyone’s enjoyment,” she said directed toward the culprits. “So many people are working hard to beautify our downtown and make it more of a destination for all people, but it requires everyone to be respectful of our public spaces and property.”

Bedford said a police report has been filed and the incident is still under investigation.