In less than a week, Faught Volunteer Fire Department was overwhelmed with the community’s outpouring of support after its sent out a plea for help with its high fuel bill of more than $900 on July 2, and reportedly received more than $3,600 by July 9.

Originally, the department asked for a simple dollar donation through PayPal or Venmo services, showing a fuel bill for more than $900.

“We have 3,000 loyal followers, so we hope y’all can help us just a little to keep us going,” the original post read. 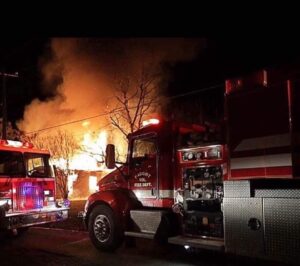 Faught Engine 1 and Tanker 1 responds as automatic aid for a structure fire in Blossom VFD’s district.

“We only had a few give a dollar, and almost everyone gave more than that,” he said, as the department reached more than 10,000 people, and received more than $3,600 in donations. “It was quite successful, and we were more than humbled by the response.”

With 2022 just halfway through, Browning said this year’s fuel bill has already exceeded the entire year of 2021’s about $4,500.

As the department started using PayPal and Venmo during its annual Pancake Breakfast Fundraiser, Browning said people don’t typically use checks as often as they used to.

“Times have changed, and our newer generation doesn’t use checks,” Browning said. “Twenty years ago you’d put your address where you can send a donation, and people were accustomed to writing a check and mailing them. For years, we would put a pre-addressed, stamped envelope for a donation and we’d get vast amount of replies from people enclosing their checks.”

The money donated through the Facebook fundraiser will go directly toward Faught VFD’s operations.

“It hits home when you know how much you’re spending with fuel and then realize that a VFD needs the money to pay for their fuel as well. Nothing is free in this business. The only thing we do is contribute our time, everything else costs us money – light bill from two stations, insurance, workers comp., you name it,” Browning said. “Our bills are like any other business. Only thing we don’t pay for is the labor.”

Browning emphasized how people can donate to their respected volunteer fire departments by simply giving a volunteer representative a check or cash, and “it’ll get to the right spot.”

“This is a worthy, charitable, non-profit organization that serves the community. Every dollar comes right back. We spend every dime we get for the public good.”