Bonham Police and Fire Departments responded to a house fire on West 2nd Street at about 10:20 a.m. on Sunday and provided life-saving aid to a couple of puppies found on scene. 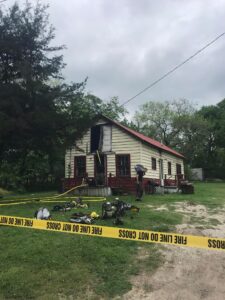 Bonham Police Department arrived on scene and was told about two puppies trapped inside the house. Both were located during a secondary search and treated on scene using the BFD’s pet oxygen mask.

Authorities reported no other injuries, and the cause is under investigation.