Blount reunites with daughter after 25 days deployed to California wildfires

After spending 25 days away from family and friends, helping with two of California’s largest wildfires in history, Lamar County Emergency Management Coordinator and McKinney Firefighter Quincy Blount was welcomed home with open arms by his seven-year-old daughter, Adley. 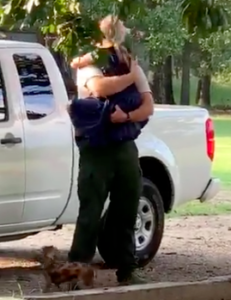 Screenshot from a video posted by McKinney Fire Department

Blount said the best part of getting home was seeing his family.

“When Adley ran up to me, I was more than happy to grab and hold her,” he said.

Blount signed up to fight fires, he made the choice to do so because he loves the job, and “I know they need the help.”

“I knew going out there it’s what I signed up for,” Blount said. “My family didn’t. That’s a choice I’ve made that affects them. They’re the ones truly picking up and taking the reins at that time when I leave out.”

Blount missed Adley’s first day of school this year because he was dispatched early that Saturday morning and her first day was the following Monday.

“I’m going out there to do what I love doing, what I’m trained to do,” he said. “They’re the ones having to keep up with the responsibilities of life.”

While in California, it was difficult for Blount because of the inability to call and talk with his wife and children to tell them goodnight. He can’t imagine how his family felt not knowing where or how he was doing.

“Me, I know how things are going. I know I was doing good,” he said. “A lot of times we’d be busy, working hard and I’d look up and it’s 10 at night – midnight over here. That’s the hardest part; not being able to talk to them. Not being able to tell them I love them and what’s going on. They’re really the true heroes.”

Without hesitation and understanding the scope of the matter, Blount jumped in to help with the wildfires.

“Do unto others as you’d have them do unto you,” he quoted. “If that’s Lamar County, if that’s my family needing help, I want someone coming. I preach that to my kids. When I leave the house, my kids have grown up knowing that I’m going to help someone.”

Blount said it’s not just California fighting the fire by themselves.

“You do nothing in emergency services yourself,” he said. “It’s teamwork. We’re a team. The local fire departments got overrun and they’re just taxed out – they’ve been fighting these fires for months, ‘We’re tired. We’re worn out.’” 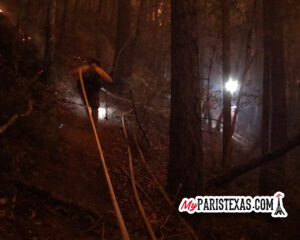 “I thought, ‘What in the world am I getting into?’” he said. “They needed help.”

When he arrived, Blount was assigned to the SCU Lightning Complex fire, California’s second-largest fire at that time (it’s now considered the third largest.)

“Nowhere in my wildest dreams did I think I’d get assigned to the largest fire in California’s history – the August Complex which is now more than 840,000 acres,” Blount said.

Working 24 hour days and recouping for 24 hours, Blount said he wouldn’t consider the time off wasn’t really time off. 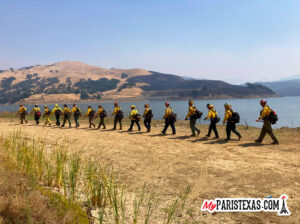 “It was really about 30 hours on the fire line and the rest of the time off,” Blount said. “But it wasn’t much resting and sleeping. We were restocking the truck, cleaning out the compartments because it’s so dusty and dry out there. We’d clean the air filters off the truck, take the hose off the truck, put new hoses on because some of the hose would get burned up.”

Blount said fighting fires in California are entirely different than those in Lamar County or the McKinney area.

“Fighting fire in California, you have to deal with the mountains,” he said. “Out there, it’s like the mountains in Fort Davis, Texas, meet the piney woods of East Texas – those fires can erupt, run up the trees and take off.”

The smoke, Blount said, was so thick in the atmosphere it was like an apocalypse.

During downtime, Blount said one day he “went to Barbershop 101 real quick.” 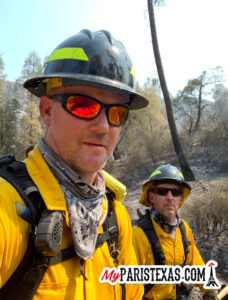 “Barbershops and stuff were closed, of course,” he said. “So one day, we had a few hours of downtime, and my hair was long and my driver’s hair was really long. We wanted to cut hair, so I got a set of clippers. I shaved my hair, and everyone was like, ‘Hey, man. I want a hair cut.’”

Blount said he spent an hour or so cutting hair.

Blount, helping California when they needed it, said firefighting is what he loves to do.

“This is what I’ve been trained to do,” he said. “The experience I get on those mobilizations or these events, and to bring that back to Paris and Lamar County, I think it’s a huge benefit for the community.”

“If we get a fire in Lamar County that’s 100 acres, we have a lot of departments going,” he said. “I feel like the more experience we get with that and the more experience I can bring back, we can cut those fires down. We can benefit in our county from this experience.”

Even with local firefighters and volunteer firefighters helping with California’s fires, Blount said, “I’m glad we’re getting to do that.”

“I want more of our guys going out there to get the experience,” he said. “Those guys are going out there, getting that experience and bringing it back here for the citizens of Lamar County. The experience gives them the ability and knowledge to be able to stay calm and say, ‘I’ve seen situations like this before.’ They will know how to handle it.”

Blount said the on the job training local firefighters get by helping the other agencies with the fires in California is something, “you’re not going to get around here.”

“It’ll cut it close,” he said, “and if I’m back before her birthday, it’ll be a few days in advance. She and I had a long talk about the possibility of me missing her birthday. She’s aware, but also understands why.”

“We’re just out there doing what we’re trained to do and what we love doing,” he said.

A happy homecoming for one of the McKinney firefighters returning from California! It’s all about family ❤️ #californiafires #wildfires #homecoming #FireFighters pic.twitter.com/icnONgWDzB