Afterlife Haunted Attraction, built from a love of Halloween

Catering to thousands of thrill-seekers each Halloween season, Afterlife Haunted Attraction’s creation came from a love for Halloween. 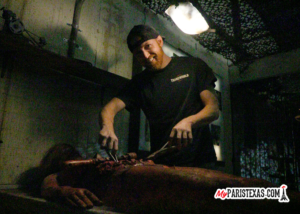 “I’ve always been into haunted houses and things of that sort,” Afterlife Owner and Operator David Crossland said. “Even growing up, as a kid it was trick-or-treating, then you grow out of trick-or-treating. So you start looking for other avenues.”

Afterlife got its name from one of Crossland’s favorite Halloween-themed movies.

“My favorite horror-ish movies would be ‘Beetlejuice,’” he said. “That seems kind of not typical of someone to say, but I just like that Tim Burton style. I like the comedy of it, but it’s still kinda quirky, fun, and kinda scary in parts.”

Crossland said he didn’t want to limit himself through the name of the attraction, which is why the haunt is called, ‘Afterlife.’

“I didn’t want to be very specific with the name,” he said. “I wanted to keep it generic which leads to a broader spectrum to do anything. Beetlejuice is where the name of the haunt comes from. In the movie, he’s sitting in the chair, opens up the newspaper and the newspaper is called, ‘The Afterlife.’”

He said he enjoys other movies like “Texas Chainsaw Massacre” or “Friday the 13th.” But Beetlejuice, he said, was definitely the most influential. 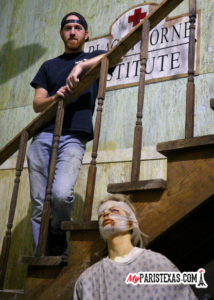 “As you get older you don’t do the trick or treating thing anymore, so you’re looking for that Halloween fix,” he said. “I knew there was no real haunt in this area, so I felt like I found a little niche in the market and I knew if I could put on a good quality show – have a cool set, awesome actors, put everything into it – we could make something successful.”

Crossland takes pride in stepping back and gazing at the work he has put into Afterlife to get it to where it is now.

“That’s what I really enjoy about it – the finished product that I’ve carried through from February when I was drawing it on a piece of paper, designing it, until the doors open in October,” he said.

During his freshman year at Prairiland ISD, Crossland said the school put on its own haunted house – the first time he was put into the haunted house scene.

He said the school recruited high school students and divided them into small groups to work in the haunted house, and they did one each year throughout his senior year. Overall, Crossland said, there was no theme to the haunted house put on by the school. However, “we made the best of it.” 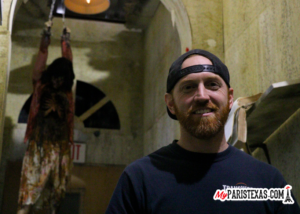 “I believe it was the last year, we did kind of an old school surgery room and had skill saws and drills and all that fun stuff,” he said. “It’s funny to think back on that kind of stuff, because we still use those types of props now. But it’s on a completely different level. Back then it was the drills and skill saws. That was what we relied on. That was our scare, and that was our tool to scare people.

“Now, where we’re at, you don’t really think about that kind of stuff,” he said. “It’s more selling the environment you’re in. If I can make you feel like you’re somewhere you’re not supposed to be or a completely different environment, that’s the key. Then putting good actors in spots with lines, acting out, then that skill saw, that drill or whatever becomes another little tool in your toolbox. It’s no longer your main focus.”

He said it’s entertaining to think back to high school, where they used simple props to scare people and compare it to now. Now, Crossland designs themes, picks, and chooses different parts and roles for actors.

“When it comes to designing a theme or building a room, my ideas and inspiration come from going to other haunts, movies, video games – I draw inspiration from tons of different stuff,” he said. “I’m designing the haunt for what I think my customers want to see, what they want to experience. If I wasn’t a part of this haunted house, what would I want to go out and see?”

Crossland said each year the haunted house gets changed around to give “something new and exciting each year.” 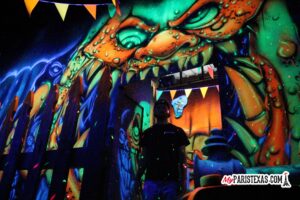 Each year, Afterlife changes about 30 percent of its attraction so event-goers have something new to enjoy. Crossland said when it comes to scaring people, they don’t reach for the same level.

“We train some actors to come from overhead, we’ve trained some to come from the floor, some that slide across the concrete,” he said. “People are scared of different things.”

This year’s haunt will feature a 3D clown area – something new they haven’t featured before.

“I had to really take a step back,” he said. “I started calling people I knew who had 3D areas in their places. See what worked for them, what didn’t so I could come back and implement them into ours.”

Crossland said the tunnel was challenging for them as well because they had to carry it from Houston, all in one piece. 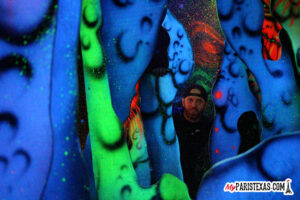 “We had to drive to Houston, pick it up with a tractor, drove all the way home safely,” he said. “The issue here was, I already had the asylum in the way. So getting that thing through the door, into where it’s at and set without the use of power equipment was a nightmare, but we got it done.”

The man behind the mask – David Crossland 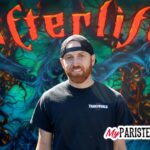 Graduated from Prairiland, Crossland worked toward a business degree at Paris Junior College.

“I’ve always known I wanted to own some kind of business one day,” he said. “I never thought it’d be a haunted house, but it is what it is.”

While in college, Crossland wasn’t involved in any haunted houses, even though he visited some.

However, about nine years ago Crossland was working in Clarksville at a natural gas plant and a handful of his coworkers enjoyed Halloween and haunted houses. They decided to open a haunt in an old slaughterhouse in Annona. After about three years, Crossland said they lost interest, “except I started picking up steam.”

“I spent two years traveling, seeing haunts, meeting new people, talking to owners – anything I could get my hands on haunted-house related, I was doing,” he said.