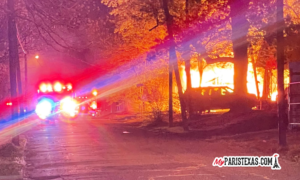 At about 1:30 a.m. today, Paris Fire Department was dispatched to 827 W. Houston Street in regard to a storage building on fire. Once on scene, crews found two storage sheds and two homes fully engulfed, damaging another.

According to Paris Fire Department fire reports, the fire originated in a shed at 827 W. Houston St. It’s also reported the fire had spread to the house directly to the north of the shed, receiving “significant fire and smoke damage throughout.” 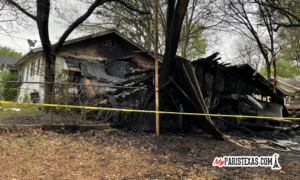 Once crews were on scene, they noticed the shed’s structure had already been consumed by the fire, spread to another shed at 839 W. Houston, damaging 839’s main house. The structure at 839 received significant heat damage to the south side – its exterior and inside. As the fire had already spread, a home at 815 W. Houston received damage to its exterior – melting of the siding, radiant heat damage and small amounts of fire damage. 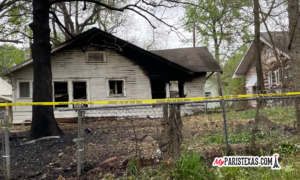 Neighbors next to 827 W. Houston St. reported homeless people have been seen squatting there in the past.

Fire crews were back in service and clear of the scene at about 4:15 a.m., and the main cause of the fire was undetermined.