Paris Fire Department responded to an active structure fire earlier this morning at about 2:50 a.m. As flames were showing on the east side of the residence, the family were able to evacuate safely with their pet. 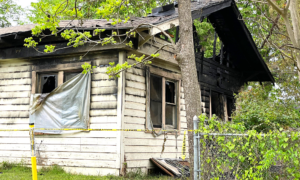 Once on scene, Paris Fire Department’s Quint 4 crew were able to knock the fire down and entered the building with a 1 3/4” hose.

“Once inside they encountered heavy smoke conditions and fire in three rooms – bedroom, kitchen and laundry room – as well as fire in the attic,” according to Paris Fire Department fire reports.

After using another 1 3/4” hose near a door toward the back of the house. They then proceeded to assist Quint 4’s crew.

After Oncor and Atmos were contacted to secure utilities, Paris Fire Department Deputy Chief Chad Graves spoke with the occupants about what may have caused the fire. 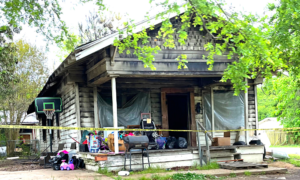 “They stated that around (2:40 a.m.) they heard a ‘pop’ coming from the rear of the structure,” the fire report states. “Upon investigating what it was, they found a fire in the laundry room. At which time they and their pet exited the structure and called (9-1-1).

It’s reported the fire appears to have started in the rear of the house, near the laundry room, and there was no sign of obvious forced entry, nor any other sign of suspicion.

“The property owner was on scene and state that there was a smoke detector in the house, however the occupants could not remember whether or not they activated,” per the fire report. “After the fire was out, the occupants made entry accompanied by Paris Fire Department personnel to retrieve personal items and then the scene was taped off.”

American Red Cross was called to the scene to offer assistance to the occupants, and units were back in service at about 4:35 a.m.