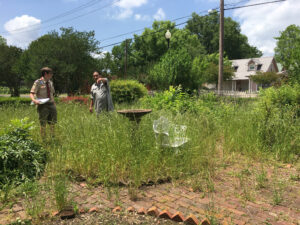 “I began by spraying weed killer on the weed-infested garden. Then, we weeded, tilled, added garden soil, added mulch, and planted plants,” the high school senior said. “A final touch was adding some plant identification signs.”

Kuebler, who joined Troop 2 in 2015, said he chose the historic site because of his interest in history.

“They liked the idea and agreed to let me do the project,” Kuebler said. “They put me in contact with Hal Simon, who works for the Texas Historical Commission. He researched a list of historical plants that would have been used in the late 1800s and early 1900s and also with the list, he provided me with a map that showed where the plants should be planted.” 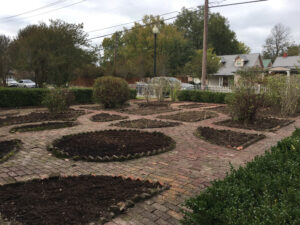 A challenge Kuebler faced during his Eagle project was gathering donations and finding plants after the most recent winter storm.

“While I would have gone to garden clubs for donations,” he said, “these groups were not meeting during COVID. “Mulberry Creek nursery went above and beyond to find several plants I needed to purchase.”

Home Depot donated a camellia, weed killer and gardening soil; Tractor Supply Company donated daffodils and weed preventer; Jemasco donated a palette of mulch, “which was plenty for my project.” The Joseph Ligon Chapter of the Daughters of the American Revolution gave a monetary donation which was used for additional plants and identification signs. Mike Taylor, Troop 2’s scoutmaster, donated additional garden soil, and my family donated some plants. An assistant scoutmaster, Dr. Bill Bright, brought a tiller, “which saved a lot of time in preparing the soil.”

“I learned how much planning goes into projects of this scale, and I learned how to effectively communicate to businesses and the volunteers during the workdays,” Kuebler said as the crew put in more than 980 man-hours, “which shows that without all the scouts, friends, and adult volunteers who helped, this project would not have been accomplished. Boy Scouting, as a youth-led program, puts a focus on leadership skills such as planning and communicating effectively.”

As a third-generation Eagle in the Kuebler family, he said scouting isn’t “just something you do and get out of.

“This shows that scouting can be a program that is effective and continues through each generation,” he said. “I plan to continue to help out with Troop 2 activities as an adult leader.” 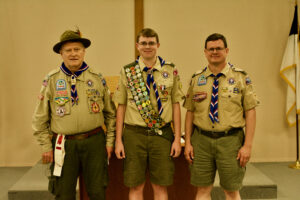 “Having the opportunity to be a third-generation Eagle definitely pushed me to work toward the Eagle rank, but what kept me interested in the scouting program is the outdoor experiences we get to have, such as canoeing, hiking, and mountain biking,” Kuebler said. “One of the most important things is that the program is youth-led and that we get to plan whatever camps we want to go to.”

Kuebler’s advice to anyone pursuing the Boy Scout program is “to not quit.

“… scouting has had a positive impact on me, and it teaches really great values by encouraging you to live by the scout oath and law and creates a good work ethic,” he said. “I would encourage each youth to try and attain the rank of Eagle, and I think it will positively impact them as it did me. Troop 2 specifically has great adult leaders that are really helpful and want the scouts to succeed.”

One of the fastest, biggest asteroids will...