Texas is among states that sued the Biden administration over its mandate. An appeals court ruled in the president’s favor Friday and reinstated the rule, set to take effect Jan. 4.

Texas Attorney General Ken Paxton has pledged to take his fight against a federal COVID-19 vaccine mandate for large businesses to the Supreme Court.

That vow came after the 6th Circuit U.S. Court of Appeals ruled in a 2-1 vote that the mandate set by the Biden administration could go back into effect. Under the directive, companies with more than 100 employees must require that their workers to be vaccinated against COVID-19 by Jan. 4 or get tested weekly for the virus. The mandate would affect around 80 million workers.

In an opinion for the ruling, Judge Jane B. Stranch wrote the costs are high for not implementing the federal rule developed by the Occupational Safety and Health Administration.

“Fundamentally, the [rule] is an important step in curtailing the transmission of a deadly virus that has killed over 800,000 people in the United States, brought our healthcare system to its knees, forced businesses to shut down for months on end, and cost hundreds of thousands of workers their jobs,” Stranch wrote. 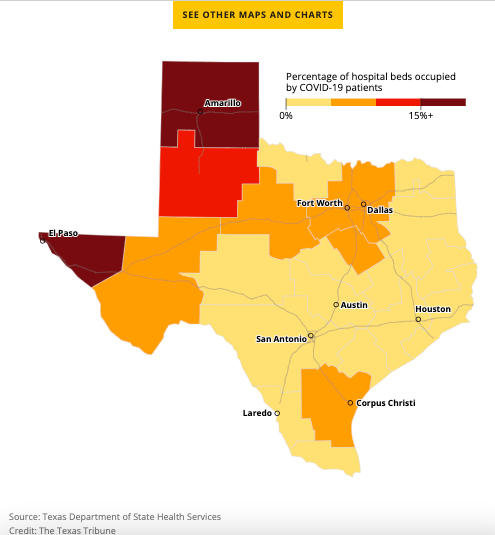 The percentage of hospital beds being used by COVID-19 patients in each trauma service region shows how the virus is currently impacting hospitals in different parts of the state.

On Friday, Paxton called the mandate “un-American” and said on Twitter that he would “immediately take this to [the Supreme Court] to seek a reversal.”

Friday’s court decision reverses an earlier ruling from the U.S. Court of Appeals for the 5th Circuit that temporarily blocked the Biden mandate.

Paxton has also wielded a legal fight against another federal mandate that requires federal contractors to be vaccinated against COVID-19. The mandate is currently halted after a federal judge blocked it from being enforced.

Paxton’s pledge to continue the fight comes as the number of people testing positive for the virus in Texas is rising, fueling worries about the struggling health care system’s ability to weather a new surge.

Most Texas voters support requiring masks at schools and indoor public places and allowing businesses to require their employees to be vaccinated, according to a University of Texas/Texas Tribune Poll conducted in October.

Disclosure: The University of Texas at Austin has been a financial supporter of The Texas Tribune, a nonprofit, nonpartisan news organization that is funded in part by donations from members, foundations and corporate sponsors. Financial supporters play no role in the Tribune’s journalism. Find a complete list of them here.

BY ALLYSON WALLER with Texas Tribune.