Reno residents and travelers will be welcomed to the city by a newly, unveiled sign on Hwy. 82. 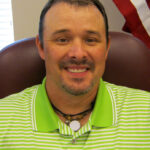 The new sign came from a collaborative effort between Reno City Council and Reno Economic Development Committee for about two years. Brandon Thomas, Reno council member, said the main focus for the two organizations was to work toward the city’s aesthetics – “to help make the city more appealing to businesses that might want to come in or to citizens who want to buy or build a house in Reno.”

“I was really impressed with how the sign turned out,” Thomas said. “It’s great getting businesses from Reno to help put it together, instead of having to go off to say Dallas or somewhere outside. We’re keeping the money local.”

Within this year, the city of Reno installed a new sign on Hwy. 82 and on Airport Road. The city also plans to replace a sign near city hall with one similar to the one on Hwy. 82.

“We were lucky enough to actually get two local businesses to work on the sign – North Texas Fab and BoeStone LLC,” Thomas said.

Thomas said Reno has plans for the very near future to help beautify the city.

“The standpipe behind Lamar National Bank is going to be completely retrofitted, sandblasted and that standpipe will be painted to look nice,” he said. “We have some other projects like planting crape myrtle trees up and down 82 – projects to really make Reno aesthetically appealing for everybody.”

He said these plans could be put into effect by October 2021.

For more information on the city of Reno visit its website here.