Early ballots are in, and voters are heading to the polls early Tuesday morning to vote for the candidate they want to represent their party in November’s general election.

On Tuesday, polls will be open from 7 a.m.-7 p.m. For a list of polling locations, click here. 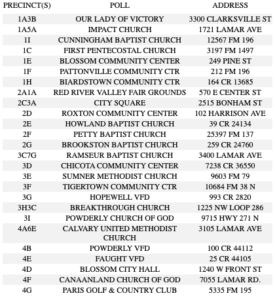 Lamar County houses just under 31,600 registered voters, and less than 10 percent of them showed up to the polls early. About 3,130 ballots were cast during early voting in this primary election, compared to the more than 3,380 votes in 2020’s primary election.

Running under the Democratic Party:

Running under the Republican Party:

To view a sample ballot for the Republican Party candidates, click here.

To view a sample ballot for the Democratic Party candidates, click here.