The  Texas Medical Association (TMA) presented its highest physician honor to someone who didn’t even start her health care career, more than 50 years ago, as a doctor. 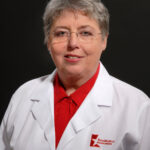 Josie R. Williams, MD, of Paris, Texas – who first was a registered nurse before becoming a successful Texas physician – became TMA’s 2020 Distinguished Service Award recipient during a video presentation before the TMA House of Delegates virtual meeting on Saturday.

Finances blocked her from medical school at first, though it was always her dream. “I can remember sitting in church and in grade school and writing ‘J.R. Williams, MD,’” she said.

To pay for more-attainable tuition to nursing school, she sold 40 head of the family’s cattle. More than a decade later, she would achieve her ultimate goal.

“Only in America can a penniless, bronc-riding, hay-pitchin’, cow-milkin’, young rural Oklahoma-New Mexico-Texas girl growing up in the early ’40s and ’50s have the audacity to dream a dream that one day she’d be a physician,” said Dr. Williams. “That dream did come true, and for that I’ll be eternally grateful.”

Throughout her career, the now-retired Dr. Williams was a leader in both the medical field and in TMA, including serving as president of America’s largest state medical society in 2008-09. Among the many issues she championed as TMA president, the gastroenterologist and internist worked for years on improving quality of care and patient safety. She also represented TMA and physicians in meetings with lawmakers, health care workers, and health insurance companies.

“Josie’s persistence was just unbelievable. She worked really hard to get things done,” said Doug Curran, MD, who introduced Dr. Williams for the award. “She would not give up; she kept working until she got it right. She made sure that our quality measures were absolutely perfect. She was just an amazing lady when it came to getting the job done.”

Dr. Williams often drew from her early experience as a nurse, claiming it ultimately made her a better doctor. “I was more aware of the system of medicine because of having been a nurse first,” she said. She says working as a nurse taught her to fully listen to each patient, which improved her care.

Being a nurse first also helped inform her discussions with government leaders about “scope of practice” issues, when nurses sought independent practice unbound from the auspices of a supervising physician. Until she endured the deeper rigors of medical school and residency to earn a physician’s credentials, “I didn’t know what I didn’t know,” she often said. Serving in both roles reaffirmed her belief that care teams should draw from the expertise of all specialists (including doctors and nurses) but should be led by physicians who bear the ultimate responsibility for the patient’s well-being.

Her ever-present humility also notes the flip side of her dual professions. “Sometimes I was too much nurse to be a good physician and too much physician to be a good nurse,” she joked.

Dr. Williams’ push to improve how health care delivery is assessed – ultimately leading her to become a national expert in measuring health care quality – began in the early 1980s.

“If we’re good scientists, as we should be, and if we truly are about caring for patients, then we don’t just want to know how to do it or what to do; we want to know what’s the safest, quality way that is patient-centered and the most effective way to do that,” said Dr. Williams.

She served as medical director of the Texas Health Quality Alliance from 1998 to 2001 and was a member of the National Patient Safety Foundation Board of Governors. She also served on the Board of Trustees of the American Medical Association’s (AMA’s) Physician Consortium for Performance Improvement, and on the board and several committees of The Joint Commission (formerly JCAHO) in the early 2000s, helping evaluate health care organizations to improve care quality and value.

Dr. Williams also drew upon her small-town roots to improve rural health care. In 2002, she returned to the Texas A&M University Health Science Center – where she had earned her undergraduate degree – to work on a rural health quality initiative. She helped create the Rural and Community Health Institute KSTAR Physician Assessment Program and Institute for Healthcare Evaluation, known for its quality and patient safety initiatives. She also served on the National Patient Safety Foundation Board of Governors.

“This made an enormous difference for those of us who practice in rural areas,” said Dr. Curran, a fellow northeast Texas rural physician leader. “We were able to improve our quality of care; Josie developed evidence-based standards for us to live by, and it worked great.”

While many Texas doctors also regard Dr. Williams as a pioneer who helped pave the way for women in medicine, she credits the many female physician leaders who came before her, including Ruth M. Bain, MD; Margie B. Peschel, MD; Betty P. Stephenson, MD; and Nancy Dickey, MD. [They] “pushed me, guided me, and encouraged me … to make a difference in organized medicine where I could,” she said. (Drs. Bain and Stephenson also are recipients of the TMA Distinguished Service Award, and Dr. Dickey was the first woman president of AMA.)

Dr. Williams served in the United States Air Force (USAF) as a nurse in South Dakota and the Philippines, and at Bergstrom Air Force Base in Austin. After she received her medical degree from The University of Texas Health Science Center at San Antonio, she completed her internship and residency in internal medicine and fellowship in gastroenterology at Wilford Hall USAF Medical Center at the Lackland air base in San Antonio. Dr. Williams later earned a master’s degree in medical management from Tulane University.

In 1982, she moved to Paris to become the Northeast Texas community’s only gastroenterologist. She also became chief of staff, department chair, peer review chair, and board chair of the Red River Valley and McCuistion Regional Medical Center physician-hospital organization board.

In addition to serving as TMA president, Dr. Williams has a long history of involvement in the state society. She served on the TMA Board of Trustees and on various TMA councils and committees, including the Council on Legislation, the Council on Socioeconomics, the Texas Health Care Information Center Technical Advisory Committee, the Special Technical Advisory Committee to the Governor’s Task Force on Health Care Reform, and the Quality Committee. She also was a Texas delegate to the American Medical Association.

Dr. Williams retired to her Paris ranch in 2015, but her passion for medicine remained.

“There is nothing – NOTHING in the world better than taking care of patients,” she said. “Even with all its warts and overregulation it’s the absolute greatest profession on earth and I hope we never take it for granted.”

Dr. Williams is the 56th recipient of this award, first given to a TMA physician member in 1964. She said she was “stunned” when she heard she was being honored. “It’s so humbling to be aware that you are appreciated and recognized by your colleagues,” she said. “You humble me in giving me this award,” Dr. Williams said to her TMA colleagues. “It’s one I’ve always thought belonged to Texas’ giants in medicine, and I certainly don’t fit that protocol.”

TMA is the largest state medical society in the nation, representing more than 53,000 physician and medical student members. It is located in Austin and has 110 component county medical societies around the state. TMA’s key objective since 1853 is to improve the health of all Texans.

MAU at Kimberly-Clark to Host End of Year...

Just one of City of Paris’ propositions fail...