Paris’ own James Carlton – some announcers referred to as ‘The Texas Kid’ – took first place in his class at the 25th USA BMX Grand Nationals in Tulsa, Oklahoma, over the Thanksgiving weekend.

With 34 riders in the 16-Intermediate from the U.S., Canada and even South America, this was James’ second time racing at the Race of Champions and Grands.

Waiting for the gate to drop starting the final race, alongside eight other riders from Arizona, North Carolina, Canada, Oklahoma, Maryland and Colombia, James said he thought to himself, “corny cliches like ‘this is for all the marbles’ and ‘don’t screw this up’.”

“I was trying to stay relaxed and calm,” he said. “I was kind of meditating – taking deep breaths and focusing. I have been working on gates, and I knew I had to have a good start.”

James said when he won, and saw the pay off from all the hard work put in, he was happy.

With just 17 months under his belt from riding in ROC and Grands his first time at 15, James’ parents, Keitha and Michael Carlton said they are “extremely proud of James for coming so far in the sport; for making the main events for ROC and Grands this year in 16 Intermediate; after only his 2nd year of riding.” 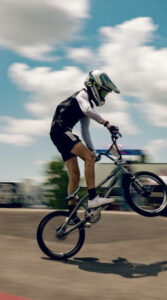 “So many things can happen in these races; crashes, bad starts, equipment malfunctions; it is very tense and stressful for riders and parents because they have to race so many times (quarters, semis, etc) to get to the main event,” his parents said. “And, although he finished a disappointing 2nd instead of 1st in the main event for ROC, he finished a convincing 1st in Grands.”

After this win and winning 16-Expert at Desoto just Monday night, James’ focus is now set on preparing for the Pump Track World Championships and ultimately improving for next year’s ROC Grands in Tulsa.

“I want to give credit to Paris Pump Track; I have learned skills and met so many people by spending time there,” James said.

James’ dad, Michael, previously said “the main reason we’re headed in the direction we’re headed into now,” is because of the Paris Pump Track. “Without it, we wouldn’t have had professional BMX racers coming here.”

James also wanted to give credit to “all the team members of Proline Cycling for their support and allowing me to be a member and track operators Casey and Chris Allen at Desoto BMX. There are so many friends who have supported me – to all of them, thank you. And especially my Dad.”

The USA BMX Grand Nationals trophy will be onsite at CycleWorks through Christmas, where James can also be found working Thursday and Friday.

“We would encourage everyone to come by and take a look. Plus, James loves to tell his story and talk about bicycles with owner Brad Hilliard. James loves to share the sport of BMX with other kids of all ages and show them how to get involved, including the correct gear!” 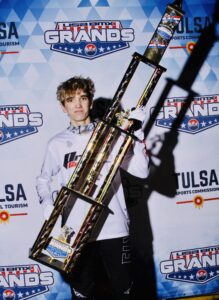 Evans Convicted of Possession of Child Pornography, sentenced to 320 years

Shooting in Paris claims the life of 31...