Paris Fire Department and Baby Gunn’s Animal Rescue jumped to the rescue late Thursday evening after the Cass family pet, Oreo, had been missing for a day and found stuck in a drainage ditch, which spanned under Highway 19/24. 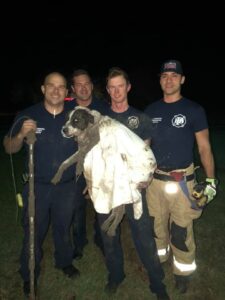 “It was an amazing team effort in saving that sweetheart,” said Baby Gunn’s Animal Rescue Adoption Coordinator Sheri Ashford. “We were not leaving until we got her as she was cold and tired.” 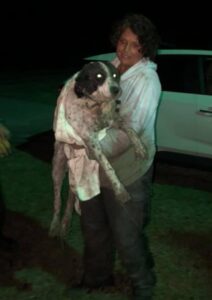 Katherine Cass said she and her daughter, Erin, drove around looking for Oreo, and came up empty-handed. However, Erin wanted to check the drainpipe, where she saw Oreo moving around, “but I couldn’t see anything.

“I could see on her face, Erin was going to go in the drain pipe and so I said I will go,” Cass said.

Not seeing a thing at first, Cass said she army crawled her way through the drain and saw eyes and thought, “Dear Lord, please be Oreo and not some rabid animal.”

“The further in you get, the thicker the mud gets and less space,” she said. “I called Oreo and she lifted her head up and I tried to coax her towards me, but she wasn’t moving. I realized she was stuck. I crawl back out and told Erin ‘I’m sorry I can’t make it to her.’ We get the shovels and go to the other side of the road and try to dig it out.”

After posting on social media about needing a “young, thin boy who can make it through there to get Oreo, so many people called saying they’d help.

Ashford and Brandi Bivens with Baby Gunn’s Animal Rescue came out to help.

Bivens “didn’t hesitate to get in the ditch” and traveled through the opposite side of the drainage ditch than Paris Fire Department. 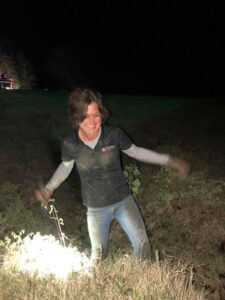 “The Fire Department got to her before I could,” Bivens said. “I’m claustrophobic, but I’ll do anything to save an animal – that’s what rescue is about, that’s what we do.

“Every dog has a soul,” Bivens. “To know one is suffering or hurting, you don’t think about your fear of small spaces or whatever the situation is, you jump in there and do it.

Cass said the fire department has the tools and knowledge in rescuing Oreo.

“We arrived on-scene to find the dog stuck in a concrete storm drain that traveled underneath HWY 19/24 around 100 yards long,” according to Paris Fire Department. “From the east end of the drain, we could see the dog but due to the space, she could not go any further and was stuck.”

“They wrapped her up and walked across the highway with her to us. She was a little stiff in her leg. Erin took her inside and gave her food and water,” Cass said.

Oreo was rescued from the shelter Easter weekend in 2012, hit by a car the next day. Dr. House performed emergency surgery.

Cass said they were put into contact with people and resources they don’t even know who were willing to help.

“We had a positive outcome for our miracle dog,” Cass said.

National Preparedness Month: How do I prepare...