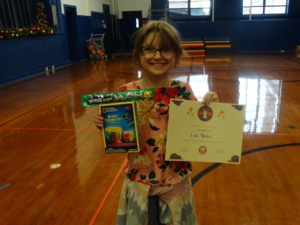 Select North Lamar Elementary students competed today in a science fair against their classmates. Their projects were judged by Region 8 Science Department Personnel. Winning Scientists are:

6th Place: “Intense VR Gaming” tested by Logan Flanagan showed us that your heart rate and temperature do go up after extended playing time on a VR headset.

4th Place: Chandler Crow decided to test the strength of toilet paper with his project titled “Roll With It.” Charmin won.

3rd Place: Allison Williams was curious to  see the effects of light and music on plants.  The plant with no light died.

2nd Place: Zoey McGee “Would You Drink Dirty Water” tested pond water to see how filtering made a difference.  She still didn’t drink it.

1st Place: Gage Calo’oy “Conductors, does size matter” tested to see if the volume, mass and density affected the resistance of electricity.

As visitors walked in, they were handed a voting ballot to vote for their favorite project.  The winner of the “People’s Choice Award” was Lola Patchin with her project called “Fun in the Sunscreen.”  Lola tested if spray or cream sunscreen worked best.  It’s still up for discussion.

Zoey McGee and Gage Calo’oy will advance to Region 8 Science Fair in the spring to test their project against others in the region.

Bailey Intermediate’s Science Fair will be in January and they will send two winners to Region 8 as well.

“Thank you to all of the students and parents who put so much work into this project to make it a success.“

CitySquare Paris presented with $2,000 donation from...