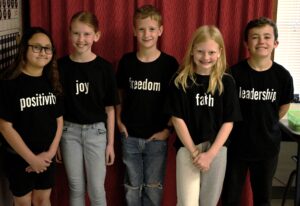 Teams are given STEAM (science, technology, engineering, arts, and math) challenges, each one presented with a story that the team created and must perform.  The challenges are student-led; sponsors are not allowed to help create the students’ projects.  Along with the prepared challenge, each team was also given an instant challenge to solve at the contest. The purpose of the instant challenge is to promote teamwork and collaboration.

“This was our first time to compete in this challenge,” Parker GT teacher Britany Creamer said. “We really didn’t know what to expect, but we never expected to win. That is for sure!”

The Bailey Elementary fifth-grade team – Callen Sheridan, Vivan Foreman, Addi Fortenberry, and Rayleigh Allmon – competed in the For the Future Service Challenge. This team placed first in the service challenge and also received the highest score in the instant challenge competition.

“Watching my students working on these challenges has been so rewarding,” Christi Coe, Bailey Team Manager and GT teacher said. “They are learning life lessons about teamwork, collaboration, taking risks, and learning from their mistakes. I felt that no matter how far we went in the competition, it would have been a great experience. My students had worked hard, and I was super proud of them going into regionals, but first and second place?? We were shocked at first, but now, we are headed to state to do our best.”

Both first-place teams advance to the state competition in Arlington on March 26.