Several northeast Texas farmers have seen a struggle in adapting to the below-freezing temperatures as livestock can not care for itself during a winter storm like the region recently witnessed.

When it comes to the change in temperature, Tommy Bove’s way of living on the about 1,500-acre ranch can be summed up in one sentence, in his own words: “Every day, you have to put on your boots and get back to it.” 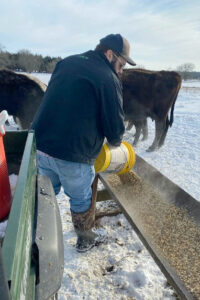 Bove said they’ve had to bust ice for their cattle at a minimum of twice a day, continuously feed, and check for newborn calves throughout the day.

“From sunrise until a lot of times after dark, we’re out there,” Bove said. “Last night (Wednesday) I was out checking for calves until about 9 o’clock or so.”

With this year prone to calving season, Bove said they have had their share of babies born, and some didn’t make it through the cold weather.

“I had one little baby that I found, and put her in the floorboard of my tractor to stay warm,” he said. “She rode around with me in the tractor for about there hours and I finally carried her in and put her on the back porch to get warmer.” 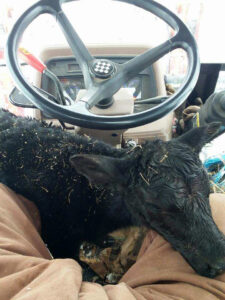 Bove said between him and his son, they lost four calves so far, due to the cold weather.

“It’s not too bad, because it could always be worse, and I know several people up north lose a whole lot more than that,” he said.

Though he has experienced below-freezing temperatures and about half-a-foot of snow in the past, Bove said it has been several years since then.

“Once in the early 80s, there was a spell like this and I was pretty young then,” he said. “But I do remember having to chop ice like we’re having to do now. It’s been a long time, that’s for sure.” 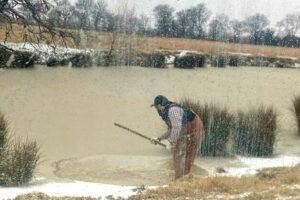 Alongside caring for the animals, Bove said a couple of his tractors wouldn’t crank due to the cold weather, and “others we’ve been fortunate enough to get cranked.”

“We just aren’t adapted to this cold weather,” he said. “The folks up north deal with it all the time, but we didn’t expect this. We thought we were home free for bad weather this year.”

Bove said they have spent more on hay and feed than they have in just about the last two months. He said water troughs were just about completely frozen, and they had to “haul water from the house to water animals we have in pins.”

As the weather forecast predicts warmer temperatures, Bove said he is more than ready.

RECALL: Surge protectors recalled due to shock and...