A Paris man is in custody after an about 2-hour standoff ended peacefully, where it was initially reported he was barricaded inside a home with a firearm earlier today. 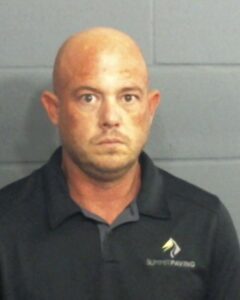 Lamar County Sheriff’s Deputies went to serve a felony capias warrant and a felony bail jumping/failure to appear warrant for Ryan Adamson, 39 of Paris; who was out on bond and scheduled for a jury selection today, in which he was absent from.

Sheriff’s Deputies arrived at Adamson’s home in the 3800 block of Morning Side, and he ran to a bedroom where he then barricaded and would not communicate with officers.

According to Lamar County Sheriff Scott Cass, deputies originally received information Adamson had an AR-15 rifle, and they had found a clip with ammunition while inside the residence.

Multiple agencies arrived on scene and helped in securing the outside perimeter and residence until Sheriff’s SRT Team arrived and took over. After about two hours, Adamson peacefully came out of the bedroom and was taken into custody. While inside the residence, investigators observed illegal contraband in plain view, which led them to apply for and receive a search warrant from Adamson’s residence. He was arrested and transported to Lamar County Jail for a second-degree felony judgment NISI for possession over 4 grams under 200 grams in a drug-free zone repeat offender and a felony bail jumping/failure to appear.

“I commend all the law enforcement agencies who quickly responded to this incident,” said Lamar County Sheriff Scott Cass. “I would also like to thank Paris EMS and Paris Fire Department for responding and supporting the law enforcement agencies engaged in this incident. Also, I would like to thank the Citizen Emergency Response Team for supplying water to all agencies on scene.”

“Through this cooperation, the neighborhood surrounding Adamson’s residence was quickly secured and the suspected was taken into custody safe and without incident. As your Law Enforcement and first responders continue to meet these challenges, I appreciate your prayers and support.”