Reno Volunteer Fire Department will soon introduce a new engine to its fire station after Reno City Council allocated $720,000 from the American Rescue Plan Act of 2021 to the VFD.

“We have been blessed to always have a city council in Reno who have helped support our fire department,” Reno Volunteer Fire Department Chief Chad Graves said. “Not to mention our citizens and the business owners that have always been there to help us.” 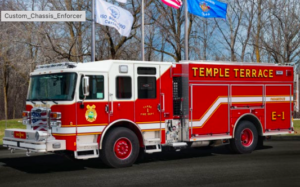 A rendition of Pierce’s Enforcer-Chassis

The Pierce Enforcer-Chassis type will not be ready for delivery until early 2024 – possibly January or February. Graves said the long wait is due to how many orders are currently being placed, alongside manufacturers having issues with sourced materials.

“Of course we would have preferred to get the new engine sooner rather than later, but we felt it was more important to purchase what we felt like we needed,” Graves said. “As I mentioned earlier, we are very thankful for our city council’s commitment to the support of our department they have always provided our department. Without this commitment, the improvements that are being made would never be possible.”

Graves said the department has looked toward replacing one of its engines for more than five years, due in part to help the department’s equipment from all reaching their life expectancy at the same time.

“This engine will have the ability to carry the equipment needed, with an increased level of safety for our firefighters in the way of rollover protection and airbags,” Graves said. “Also, due to the way this fire truck is built the turning radius is much better than our current apparatus.”

The department’s strategic plan, Graves said, they have set up an apparatus replacement plan.

“With the help of our council, we have moved closer and closer to making this purchase each year,” he said.