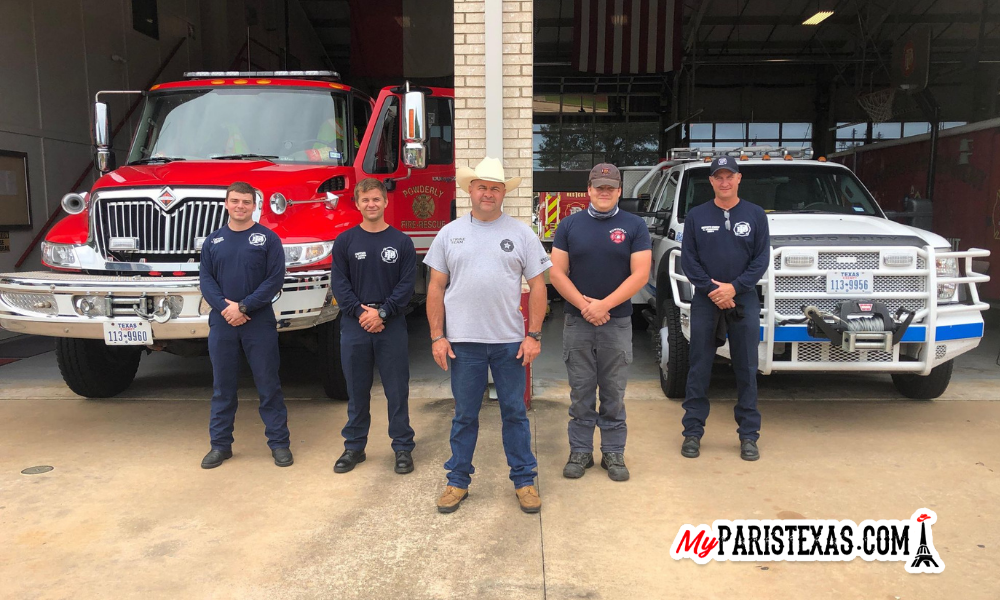 As fires continue to ravage across California, more Lamar County firefighters have deployed to help under a state mutual aid agreement.

“Being able to offer our brush truck to our two-strike teams headed to California is what teamwork is all about. The more help we can give, the better the chances they can keep people safe around those big fires,” said Powderly VFD Chief Roger Bussell. “Helping out is not just the Texas way, it’s the Lamar County way as well.”

Powderly VFD deployed their Brush-82 engine with department firefighter Trace Bussell who will team up with Greenville Firefighter Greg Woodbury. They will join the Engine Boss from Nacogdoches Fire Department Tyler Turner who will operate the Paris Fire Departments TFMAS E6-63 engine.

Reno VFD and Allen FD fighter Michael Fox is also deploying with his department and will travel with the convoy to California.

“I had only been home for four days before I got a call to deploy again,” said Fox. “But I was happy to be home to tell my son happy birthday-because a call to help, is a call to help and I’m happy to be a part of this team to get these fires in California under control hopefully.”

The second team that will join them will loadout in the Powderly Brush-82 engine. The crew will consist of Engine Boss Chuck Weets from Texarkana Fire Department who will be joined by Paris Fire Department captain Connor Wideman, firefighter Drew Boren, and Deputy Chief Randy Crawford.

Both teams will meet with other strike teams and task force teams in Dallas before traveling to California early Friday morning.

Lamar County Emergency Manager/ McKinney Fire Department firefighter Quincy Blount was deployed late last month on a 21-day rotation. Blount worked on the SCU Complex fire but has since been reassigned to another fire approximately 3hrs north of SCU.

“We have been reassigned to start a new start fire. About 3 hours north of the SCU complex fire. The sky looks like it is 8 p.m. this morning even though it’s only 8 a.m.,” Blount said from the firelines on Wednesday. “We have to drive with headlights on and use cab lights while reading over the IAP (Incident Action Plans) because it’s so dark.

At present, around 30 wildland fires are burning, according to the CAL FIRE website. The most prominent is the Creek Fire, which began on Wednesday and is still at zero containment. Creek Fire is the largest fire in California and is situated between Fresno and Mammoth Lakes, with 166,965 acres burned.

“This is unlike anything I have seen on any mobilization before. On Saturday, we had temperatures of over 110 degrees in the shade with relative humidity in the low teens and upper single digits. That made for some very unpredictable fire behavior. Today we feel like it is nighttime during the day due to all the smoke and ash in the sky,” said Blount of the current conditions firefighters are facing in California.