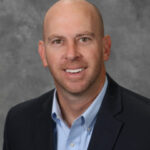 The Farmers Bank & Trust Board of Directors recently announced the promotion of Jeff Nutt to Regional Market President. In addition to continuing his efforts in the Paris, Texas market, Nutt’s promotion will allow him to support other Farmers Bank & Trust markets including Prosper, New Boston, and Texarkana.

“As soon as the purchase of nine Arvest branches is completed later this month, Jeff will support the new DeQueen, Arkansas market, which will also include Broken Bow and Idabel, Oklahoma,” said Farmers Bank & Trust Chief of Staff Mike Cross. “Jeff has had consistent success when building strong relationships with both customers and team members.”

With almost 20 years of banking experience, Nutt, a commercial loan officer, began his career as a credit analyst in Texarkana, Texas. He graduated with a bachelor’s degree in Secondary Education from Sam Houston State University and is a graduate of the Southwest Graduate School of Banking at Southern Methodist University. He also completed American Bankers Association Commercial Lending School.

Nutt said, “I’m looking forward to this new role, working with people in our Bank outside of Paris and seeing what we can accomplish together.”

Nutt is active in church and comes from a family entrenched in the Lamar County community. His father, Ronnie Nutt, was awarded the 2020 “History Maker of the Year” by the Lamar County Historical Society. He has been married to his wife, Meagan, for 16 years and together they have four children. He is involved locally with the Keep Paris Working board and has served as President of the Trinity Christian Academy school board for 10 years. In his free time, Nutt enjoys coaching his kids’ sports teams.

“I coach just about every single team my kids are on,” he said. “I love that my kids are passionate about sports like I was growing up. We’re able to spend a lot of extra time together and make memories that will last a lifetime.”

SPCA of Texas Awarded Custody of Over 80...

Texans could carry handguns without a permit...