Christmas is about Christ and He is who the Spann family exhibited through delivering more than 400 donated toys to children in tornado-ravaged Kentucky on Tuesday with the help of their church and friends.

“Something I always teach is that you’re never more like Jesus than you are when you serve someone in need,” said Phil Spann, Southside Baptist Church youth minister. “To see the churches come together (in Kentucky) – of different denominations, helping one another and doing everything because we’re Christians first – was a blessing in itself. Then it’s not about what church we belong to but about whose kingdom we belong to – Jesus’ kingdom.”

With the help of their church and friends, Spann, his wife Carla and children Lesley and Jansen, took more than 400 toys, some food and clothing to Kentucky families stricken by the devastating tornadoes earlier this month.

The Spann family set out from the Paris area at about 5 p.m. on Monday, stopped in a town north of Memphis late Monday evening and finished the drive into Kentucky on Tuesday.

“Carla and I have helped with disaster relief in the past, and we really feel like it’s God’s calling for us in our next chapter,” Spann said. “So we were just talking about it Friday morning about Kentucky and how it’s so close to Christmas. Carla said, ‘maybe we could take toys up there.’”

The Spanns delivered a portion of the toys to a church that will pass them out during a community-wide Christmas celebration on Thursday. The remainder of the toys were given to a YMCA in the area who “was distributing to a wider area of affected people.”

On their way to Kentucky, Spann said they stopped at a few stores to finish buying toys and items with already-donated money.

“People would see our trailer, ask what we were doing, and there were a couple of families who wanted to donate money so we could buy more toys. It was awesome seeing the people that were led to give to help.” 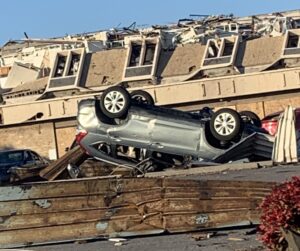 While in Kentucky, Spann said they witnessed the damage the tornado had caused in Mayfield – one of the hardest tornado-hit towns. He compared the devastation to Paris’ 1982 tornado.

“There were a lot of homes destroyed,” he said. “It’s devastating to see how a tornado tears up an area – one house will be gone, and the next one will be left untouched.”

He said they saw churches had “tons of bottled water” sitting out front of their buildings with signs that simply said, “free.” There were also organizations like Samaritans Purse and Servpro offering helping hands to those in need from assistance to food. 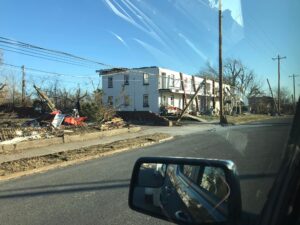 “It’s worth it just to know that you’re taking care of someone else, and serving the Lord that way. We were just as blessed as they were,” said the exhausted youth minister who arrived back home from the more than 1,200-mile trip at about midnight on Tuesday. “You know, today I’m exhausted, but it’s a feel-good exhausted, the joy that it hopefully brings someone is absolutely worth it.”