The position for a new director for the City of Paris’ Public Works Department was officially filled on Monday, July 13 following the retirement of previous long-time director Jerry McDaniel.

Michael Smith was named successor to the position by City Manager Grayson Path.

“I was thrilled to offer Michael the position,” Path said. “He has many years of experience, boasts great character, and I am confident he will represent the city in a positive light.”

Smith was one of five applicants interviewed for the position by a selection panel made up by City Engineer Carla Easton, Utilities Director Doug Harris, and Path. He has moved up his previous position within the department from the superintendent of the Capital Improvement Program.

Path said that once Smith was appointed to the position, he began the process for filling the City of Paris Fire Department Chief position.

“I have begun to work with the department to help us move forward with selecting a new fire chief and selecting an interview panel to help with the process,” Path said.

He is hoping over the next several months to see the same success as filling the Public Works Department position.

TEA announces additional reopening guidance, including local option for an online-only start to the 2020-21 school year

Mayoral runoff for City of Deport this November 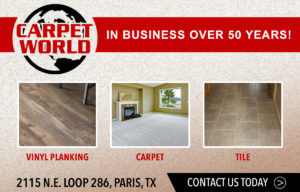 Dispatchers to be recognized as official First...