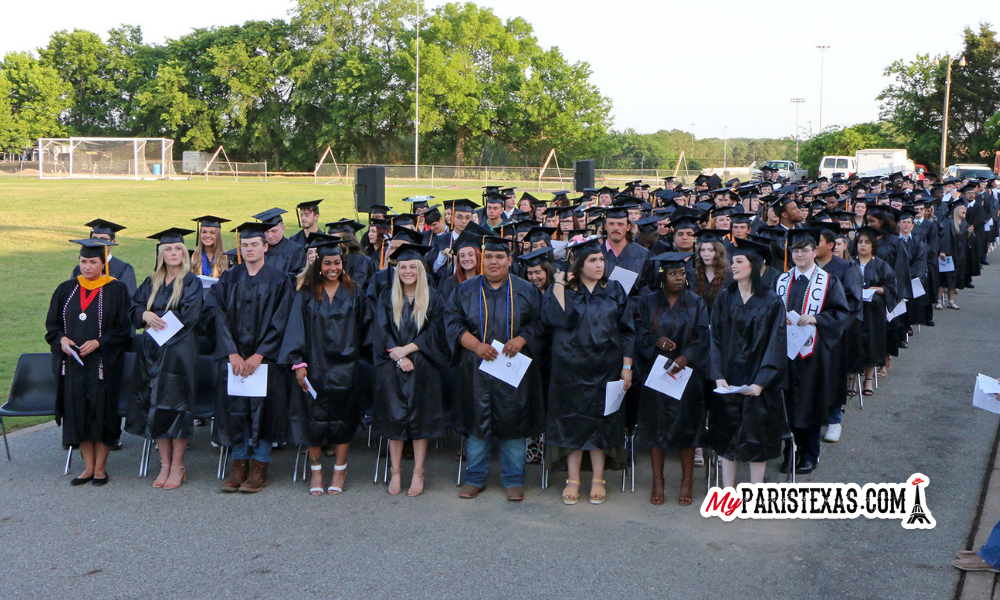 Paris Junior College celebrated its 97th Spring Commencement with the announcement of the Distinguished Service Award and Teaching Excellence Award. Nearly 475 students applied to graduate and some 250 of those indicated they would participate in the graduation ceremony held at Noyes Stadium on May 13, 2022. 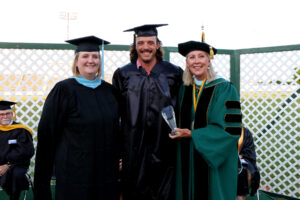 “Tonight, we want to celebrate a great year and a great group of students,” said Dr. Pam Anglin, PJC President in her opening comments. “Allow me to introduce the class of 2022. There are 472 individuals graduating from PJC with certificates and degrees. Forty-one percent are male, 89 percent are female. Our graduates range in age from 18 to 66 years. These 472 graduates represent 37 different Texas counties, 16 different states, and the foreign countries of Germany and Mexico.”

Beau Brewer was named the 2022 Distinguished Service Award winner. He is a 2020 graduate of McKinney Boyd High School in McKinney. A returning member of the Dragons Baseball Team and of Phi Theta Kappa, the two-year college honor society, he was named 2021 All Region Outfielder and named to the President’s Honor List for academic excellence three times.Brewer donates his time volunteering at the local Food Pantry, Red River Valley Boys and Girls Club, and the Paris Animal Shelter. He was a 2021 Paris Junior College Homecoming nominee and crowned 2022 Mr. PJC. 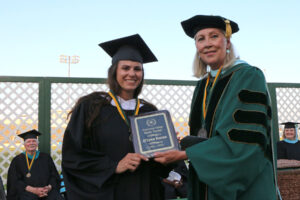 D’Lynn Bueno, who teaches history at PJC, received the 2022 Teaching Excellence Award, which includes a $1,000 honorarium, a medallion and a plaque. The nomination letter for the Teaching Excellence Award outlined three aspects to her excellence: congenial attitude, pedagogical diversity and commitment to the success of both their own students and the student body at large. She is a teacher of teachers; utilizes developments in the best practices of higher education to maximize student learning and success. She is also encouraging, compassionate, student-friendly student-centered, and operates on the leading edge of classroom innovation.

At the conclusion of the ceremony, Dr. Anglin asked the graduates to move their tassels to the left. She thanked them for choosing Paris Junior College.

“Each of you have proven that you have a goal and you have a dream,” said Anglin. “This has been one step in your journey; one milestone along the way. And we hope we laid the foundation that serves you well as you continue on with your education or go into the workforce.”