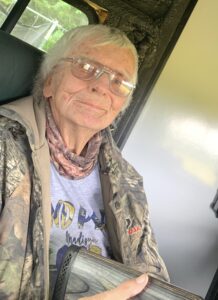 When he saw the deer with antler lengths averaging about 33”, and a spread of 24” emerge from the woods, Pearson didn’t say much but, “Oh, that’s huge. Oh, that’s huge.”

Pearson said he and Jeff Padier, his grandson-in-law, visited a local private ranch and found out about the “abnormally large Axis Deer.”

“We went out there specifically looking for him,” Pearson said, “and as luck would have it, it was there and walked right up to us – about 85-90 yards out.”

After he pulled the trigger, Pearson said he was extremely nervous, “because it was within a large group of deer, plus there was a llama in there.

“They were all milling around the feeder, and I was having a hard time keeping up the rifle, keeping my aim centered on it and waiting for it to come out into the open to get a shot off,” Pearson said.

He said he was sitting in the stand, waiting “desperately nervous” for the deer to move into the right spot so he could get a shot.

“We waited for about 15 minutes for it to get to where we could get to it,” he said. “The thing is, it had other animals standing close to it, and I didn’t want to hit any of them.”

When Pearson shot the Axis Deer, Padier said, “Uh, oh. I think you missed him, because he didn’t jump.”

“When I hit him, he didn’t just fall. He kinda galloped a bit and ran into the woodline and fell down – about 40 yards,” he said. “He was only two yards into the woodline, so it made it really easy to get it.”

He said the deer is already at the taxidermist and hopes to have his trophy displace within nine or so months.

“I wasn’t planning to really have any of my deer mounted,” Pearson said, “but this one was measured and turned out to be official trophy size – 32” tall on one antler and 33.5” on the other with a 24” spread.”

Padier said they do not turn down a trophy when one presents itself, and none of the prize goes to waste.

“This guy that (Pearson) just shot, he’s at the processor now, and we’re going to enjoy every piece of it,” Padier said.

Pearson has already enjoyed some of the processed deer Padier cooked, saying “it was really tender and delicious.

“Most of the game meat seems kinda tough to me, this tenderloin was very tender,” Pearson said.

Padier said the rain held off just long enough for them to retrieve the deer from the woods, load it up and start the drive home.

“We sat out in the pouring rain with the deer pulled up on the tractor bucket,” Pearson said. “We were out in that pouring rain cleaning it, and boy I was tired at the end of the day.”

Pearson said he hasn’t been a hunter until Padier came around, sparking his hunting interests. For the first about seven years, Pearson didn’t invest much into the sport, until this most recent season.

“I decided to get serious about it, and went every day,” he said. “During the season, I finally did get a small whitetail buck – a little button buck.”

Pearson is on the lookout for a bobcat and a coyote to add to his now-growing trophy collection.

“I prefer bow hunting,” he said. “I would also like to get a big whitetail, preferable with a bow of course.”