Sheri Ashford: ‘As a huge animal advocate, we are their only voice’ 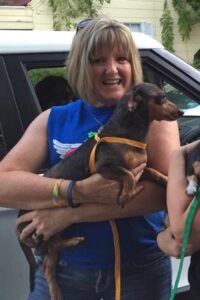 Born and raised in Roxton, Texas, Sheri Ashford has been an advocate for four-legged friends since she can remember and has been in a caregiving role – whether two or four legs – for more than 36 years.

“I’ve always had dogs and cats growing up as a child,” Ashford said. “A person I knew growing up had several cats and I saw them loading them up one day. I asked ‘where are they going’ and they said they were taking them off to a new place in the country. I found out, they were dumped on side of road.”

Since then, Ashford said she’s always had a broken heart of the unwanted pets, “and as a huge animal advocate, we are their only voice.”

When she first started working in animal rescue, Ashford had just one dog. Now, she has nine and has had many in between. 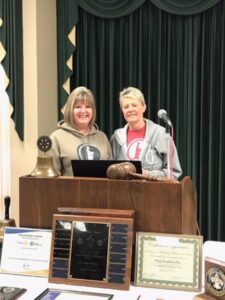 In 2012, Ashford began volunteering with the Lamar County Humane Association/Paris Animal Shelter, under the guide of Carla Stowe and Ally Huddleston Jones.

“They taught me all about animal rescue, care, etc.,” she said. “Ally and I are the ones that started the original Paris Shelter Facebook page as well and really got it on the map with just taking pictures and posting daily of what’s there, what’s needed, etc.”

Four about four and a half years, Ashford was a board member with Lamar County Humane Association and was its adoption coordinator before switching roles in 2018 and joining Baby Gunn’s Animal Rescue, “back with the original crew, who left about two years before I did.”

Ashford is now the adoption coordinator for Baby Gunn’s Animal Rescue and manages its Facebook page and its lost and found page. 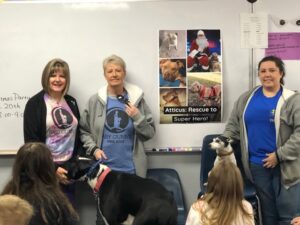 “Our lost and found page is very successful in getting these babies back home to their families, where they belong,” she said. “I do this because I know I would be heartbroken if my pet was lost or missing.

“I cannot stress enough to everyone to let us know ASAP the minute their dog or cat is missing so we can get that out there and get them back home because the first 48 hours is the most critical in getting your pet back home safely!”

Though she said it’s a stressful and 24/7 job, Ashford said it is also very rewarding at the same time.

“We get dogs at their worst and have to nurse them back to health and ready for their new families,” she said. “There’s nothing better than when you find a perfect match for families or the pet finds them, and we get those follow-up pictures of how well things are going and how happy and complete their lives are with a new fur baby in their home. It makes it all worthwhile.”

DPS announces one retirement and promotes three to leadership positions

RECALL: Gas ranges recalled due to risk of...

Girls Softball League of Paris registration for the...