Paris Police responded to a complaint of property damage in the 1500 block of Hearon St at 11:38 A.M. on May 21, 2021. The victim reported that they had arrived home from work after 2:30 A.M. and went straight to bed. When they awoke, they found that someone had shot their house at least 3 times. Paris Police responded to a call of shots fired in that area at 8:05 P.M. on May 20, 2021. No victim was located at that time. This victim was not at home when the original call was dispatched to officers. This incident is under investigation.

Paris Police were dispatched to a security check in the 400 block of E Houston St at 5:01 P.M. on May 21, 2021. Officers located the reported vehicle as it was leaving the area and made a traffic stop. The driver, Douglas Lane Seaton, 32, of Chouteau, Oklahoma was found to be in possession of methamphetamine. Seaton was arrested and charged with possession of a controlled substance of less than 1 gram. Seaton was later placed in the Lamar County Jail.

At 1:47 P.M. on May 22, 2021, Paris Police responded to a disturbance in the 2500 block of N Main St. Officers made contact with 49 year old Schweka Fanyon Brooks, of Paris. Brooks was found to have an outstanding parole violation warrant. Brooks was arrested and later transferred to the Lamar County Jail.

Paris Police located and arrested Danny Ray Ellis, 35, of Paris, in the 2000 block of Bonham St at 7:08 P.M. on May 23, 2021. Ellis was known to have an outstanding misdemeanor bond surrender warrant for an assault case. During the arrest, Ellis was found to be in possession of a small amount of Cocaine. Ellis was additionally charged with possession of a controlled substance of less than 1 gram. He was later transferred to the Lamar County Jail.

At 9:13 P.M. on May 23, 2021, Paris Police were dispatched to the 1500 block of Bonham St in reference to a wanted person. Jordan Jeremiah Monterrubio, 23, of Detroit, Texas, was located and found to have an outstanding felony Lamar County bond surrender warrant on a charge of burglary of a vehicle with 2 prior convictions. Monterrubio was later transferred and placed in the Lamar County Jail.

Texas has a constitutional amendments election this year....

‘The Conjuring’ home being sold for $1.2 million

Walmart to not offer layaway this holiday season,... 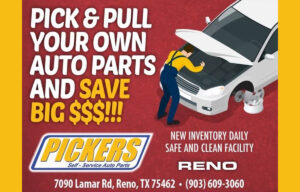