Beauty after the storm: Lost engagement ring found, proposal in the midst of devastation 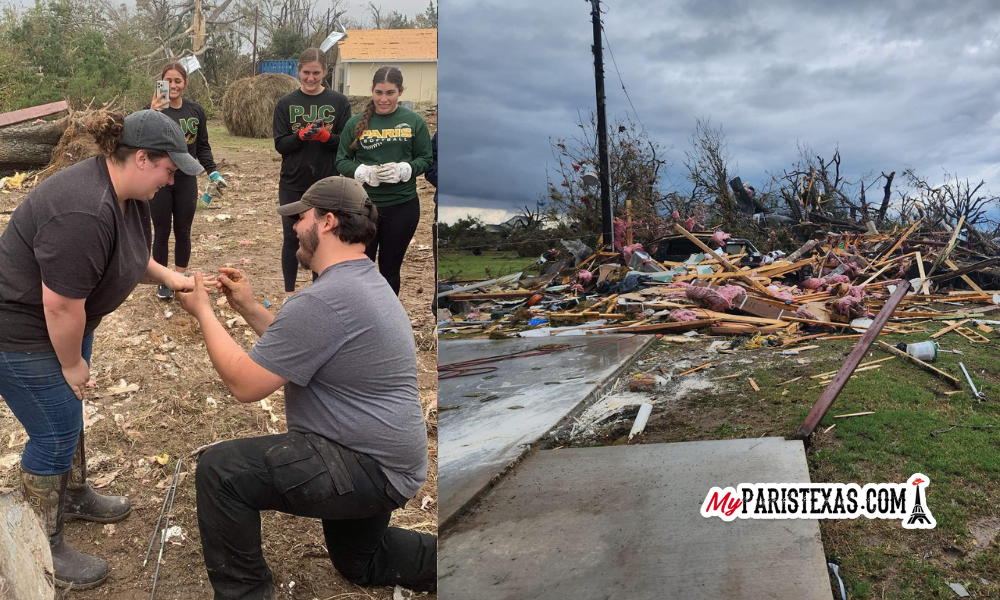 It may not have been the proposal either had imagined but for newly engaged couple, Dakota Hudson and Lauren Patterson, it was perfect and has given many hope during a dark time.

Looking around at their belongings scattered across the yard, their home destroyed and destruction as far as the eye could see, it was hard to see the light at the end end of the tunnel.

“I don’t know how we survived except for the grace of God,” said Patterson.

Patterson had just gotten home when Hudson’s father told them the pressure was dropping and to take cover. Barely making it to the bathroom, the three hunkered down as an EF-3 tornado with winds up to 160 mph hit their home.

“We began to feel the house lift up from the concrete slab. As the house began to lift, we became extremely light as if we weighed nothing and I couldn’t stop screaming but I knew if this were our last moments together, I had to accept it,” she said.

As they emerged from what was left of the bathroom, their hearts were shattered seeing their home  completely destroyed.

After rummaging through what was left, Hudson approached Patterson and with tears in his eyes told her the engagement ring he had bought to propose to her was gone.

“I told him the only thing I cared for was him and we would be ok,” she said.

In the days following, the community rallied to help those affected including Paris Junior College softball team who were assigned to help the couple by the Lamar County Office of Emergency Management.

“We had no idea until they showed up to help us. Those women were amazing,” she said.

Knowing there was an engagement ring lost, the crew started searching, and to their amazement Patterson’s cousin found the wedding band and half the ring box.

With hope the engagement ring would be found, the search never stopped and the volunteers were more determined than ever to find it and see the couple engaged.

Not long after the wedding band was found, the engagement ring was found by a student, Katie R, roughly five feet from where the box was found.

“We couldn’t believe it,” said Patterson.

With light at the end of the tunnel, there was only one thing left to do.

“Dakota rinsed the ring off and got down on one knee,” said Patterson. “And, of course, I said ‘yes,’”

Since their story went viral, local businesses have come together to give the couple the wedding they deserve.

“The couple live a few houses down from my parents and after reading their story I thought it would be amazing if local businesses all came together to give them a wedding,” said Chelsea Harvey.

Harvey started a GoFundMe for the couple https://gofund.me/cc490b0b and is helping coordinate businesses wanting to donate their services.