Over 200 people attended the United Way of Lamar County’s Annual Breakfast Meeting on Wednesday morning at the Love Civic Center.

The event which recognizes the previous year’s outstanding workplace campaigns and volunteers is usually held in February but had been postponed several times due to the pandemic.

At the start of the meeting, United Way Executive Director Jenny Wilson explained how much the United Way had changed within the past 18 months.

“The last time we all met was in February of 2020 just before the world changed,” she said. “Since then, the United Way has changed our mission from being primarily a fundraiser to directly assisting those in need. We exist to be whatever this community needs us to be and to serve those most in need.”

Wilson said one way the organization has moved from fundraising to helping is through its rent and utility assistance programs, which distributed more than $70,000 in assistance in 2020 and almost $100,000 to more than 350 families in 2021 so far.

She also said the United Way has expanded its educational programs and will continue to be committed to funding and collaborating with partner agencies to help the community.

The awards ceremony began with recognition of the three former Board of Directors, Trey Glascock, Robin Kennedy and Neta Painter, who rolled off the board in the beginning of the year 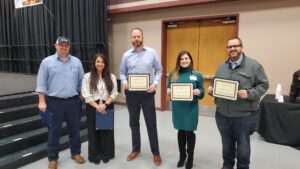 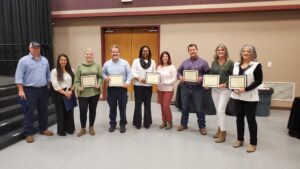 Wilson thanked Atmos Energy for underwriting the United Way’s new mini library and mini food pantry programs and also thanked the dozens of small businesses and individuals who combined give over $100,000 annually to the campaign. 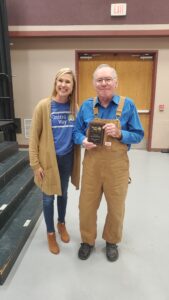 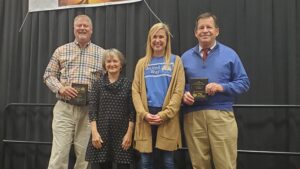 This year’s Lifetime Community Service Leadership awards were given posthumously to Philip Cecil and Pat Cochran.

This year’s Lifetime Community Service Leadership awards were given posthumously to Philip Cecil and Pat Cochran.  Mary Clark presented the awards and detailed the significant contributions each made to Lamar County during their lifetimes. Carl Cecil and Dr. Ernie Cochran accepted the awards to a standing ovation.

The United Way of Lamar County is currently running its Fall Campaign for 2022 funding with a $550,000 goal.  The campaign runs through mid-November and those interested in donating can mail donations to PO Box 1, Paris TX 75461 or donate online at www.lamarcountyuw.org.

Santa in the Hut schedule released ahead of the holiday season