On Thursday, May 5, 2022, the North Lamar Theater Department’s company of Moon Over Buffalo took first at the UIL 4A One Act Play State contest. This marks the program’s ninth appearance at state and the second state championship, the first was in 2010. 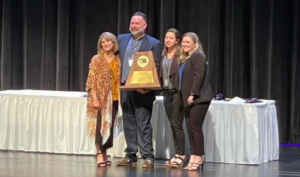 Along with the company placing first, individual recognitions went to the following students: