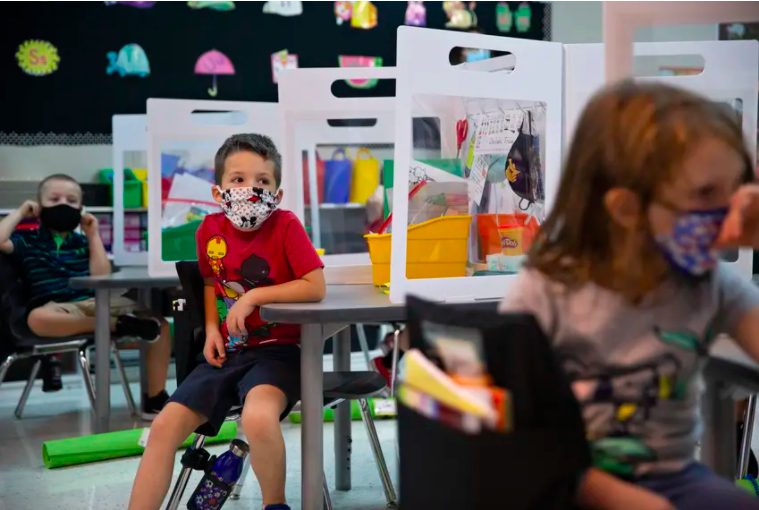 The judge said the governor’s order impedes children with disabilities from the benefits of public schools’ programs, services and activities, in violation of the Americans with Disabilities Act.

The order comes after a monthslong legal dispute between parents, a disability rights organization and Texas officials over whether the state was violating the 1990 law, known as the ADA, by not allowing school districts to require masks. U.S. District Judge Lee Yeakel barred Attorney General Ken Paxton from enforcing Abbott’s order.

“The spread of COVID-19 poses an even greater risk for children with special health needs,” Yeakel said. “Children with certain underlying conditions who contract COVID-19 are more likely to experience severe acute biological effects and to require admission to a hospital and the hospital’s intensive-care unit.”

The judge said the governor’s order impedes children with disabilities from the benefits of public schools’ programs, services and activities to which they are entitled.

The advocacy group, Disability Rights Texas, filed the federal lawsuit on behalf of several Texan families in late August against Abbott, Paxton and Texas Education Agency Commissioner Mike Morath. It states that the governor’s order and the TEA’s enforcement of it deny children with disabilities access to public education as they are at high risk of illness and death from the virus.

Kym Davis Rogers, litigation attorney with Disability Rights Texas, said in a statement that the court found that Texas is not above federal law and state officials cannot prevent school districts from providing accommodations to students who are especially vulnerable to the risks of COVID-19.

“No student should be forced to make the choice of forfeiting their education or risking their health, and now they won’t have to,” Rogers said.

Rogers said she doesn’t rule out the state appealing the decision in the 5th U.S. Circuit Court of Appeals because the state has done so before, most recently with its new law that bans abortions after as early as six weeks.

The TEA, Paxton and Abbott did not immediately respond to a request for comment. But later Wednesday, Paxton tweeted that he disagreed with the decision.

“My Agency is considering all legal avenues to challenge this decision,” Paxton said in the tweet.

Texas kids ages 5-11 started getting their first COVID-19 vaccine injections last week after the U.S. Centers for Disease Control and Prevention earlier this month approved the Pfizer-BioNTech vaccine for emergency use for that age group. The move came after nearly two years of sickness, grief, isolation and learning loss that accompanied the pandemic for the nation’s young kids, including some 2.9 million Texas children ages 5-11.

In court documents, Ryan Kercher, the attorney representing the state, argued that neither the attorney general nor the state education agency were enforcing the executive order so they couldn’t be sued.

But Disability Rights Texas attorneys said the three were enforcing the order and provided the court with a letter that the TEA sent to the attorney general’s office. In it, the education agency listed school districts that appeared to be operating in violation of the governor’s order. The plaintiffs also noted how Paxton sued several school districts over requiring masks and sent “threatening” letters to districts telling them that they were violating the order.

This isn’t the first time state attorneys argued that Paxton and Abbott didn’t actually enforce the law. In an August lawsuit against the state over the mask order, Paxton made the same argument and indicated that it was up to local county prosecutors to enforce the order.

Attorneys with the U.S. Department of Justice have weighed in with a formal statement in this case. They argued that the banning of mask mandates in Texas public schools keeps disabled children from accessing in-person classes during the ongoing coronavirus pandemic. They also argued that Texas schools can’t merely rely on online classes to avoid violating the ADA. Instead, the federal agency contends, Texas schools must offer disabled students every available class option.

Disability Rights Texas accused Texas of violating the ADA and the Rehabilitation Act, which forbids organizations and employers from excluding or denying individuals with disabilities an equal opportunity to receive program benefits and services.

The case was filed and heard while Texas schools had more coronavirus cases in the first two months of the school year than they did in the entire 2020-21 school year.

The U.S. Department of Education Office for Civil Rights is also investigating the TEA after finding the state agency’s guidance prohibiting mask mandates in schools may be “preventing school districts in the state from considering or meeting the needs of students with disabilities.”

The federal civil rights office has also launched similar investigations in Iowa, Oklahoma, South Carolina, Tennessee and Utah. It had not done so in Texas because the TEA at that time had not enforced the governor’s order while there was ongoing litigation.

In a letter to the TEA commissioner, federal officials said their investigation will focus on whether students with disabilities who are at greater risk for severe illness from COVID-19 are prevented from safely returning to in-person education, which would violate federal law.

Suzanne B. Goldberg, the acting assistant secretary for civil rights, stated that her office is worried that Texas’ mask policy does not allow for “an equal educational opportunity to students with disabilities who are at heightened risk of severe illness from COVID-19.”

Kailyn Rhone contributed to this report.

Photo: A student listens to their kindergarten teacher on the first day of in-person classes at a North Texas elementary school last year.  Credit: Shelby Tauber for The Texas Tribune

BY BRIAN LOPEZ with Texas Tribune.