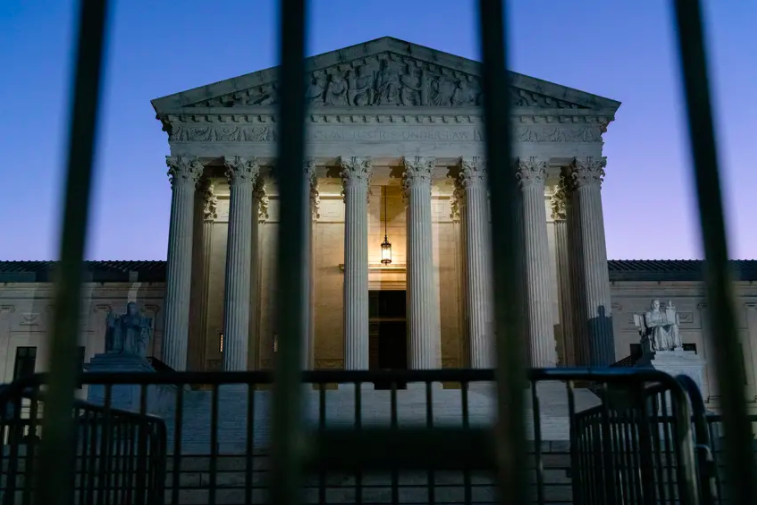 Texas has passed legislation that ensures abortion would be made a felony if Roe v. Wade is overturned “wholly or partly,” as the court considers Mississippi’s 15-week abortion ban.

The U.S. Supreme Court will hear arguments on Wednesday in a Mississippi abortion case that has the potential to overturn Roe v. Wade. While the case, Dobbs v. Jackson Women’s Health Organization, stems from a challenge to a Mississippi law banning abortions after 15 weeks of pregnancy, the high court’s ruling could have seismic impacts for Texas.

Texas legislators have ensured the state is ready if Roe v. Wade is overturned by this case or any future ruling. Last June, Texas joined 11 other states by enacting a measure that automatically bans abortion after Roe is overturned without having to call a special legislative session.

“For the first time that I’ve been involved in this issue, which is more than three decades, I have real hope that there are enough votes on the Supreme Court to take a fresh look at the tragic Roe v. Wade precedent and possibly modify it or overturn it,” said Texas Alliance for Life executive director Joe Pojman, who lobbied for the so-called trigger law.

This Supreme Court hearing comes at a precarious moment for abortion access in Texas, as the state and abortion providers await a ruling from the same court on Texas’ most recent efforts to limit abortion. Women have been unable to obtain abortions in Texas after about six weeks of pregnancy since Sept. 1, when the controversial abortion ban went into effect.

Texas’ law, known originally as Senate Bill 8, is unique in that private citizens, not state officials, can enforce it by suing anyone who “aids or abets” an abortion. This civil method of enforcing the law is intended to evade judicial review and is at the crux of the case that the Supreme Court was asked to consider.

Many experts expected the Supreme Court to rule on the Texas case ahead of the hearing in Dobbs v. Jackson, but a decision has not yet been issued.

The Mississippi case is a challenge to a 2018 law there that banned abortion after 15 weeks of pregnancy except in medical emergencies or cases of severe fetal abnormalities. That state’s last remaining abortion clinic sued and a district court struck down the law, sending it to the 5th U.S. Circuit Court of Appeals in New Orleans.

“In an unbroken line dating to Roe v. Wade, the Supreme Court’s abortion cases have established (and affirmed, and re-affirmed) a woman’s right to choose an abortion before viability,” wrote Judge Patrick E. Higginbotham.

Mississippi appealed to the Supreme Court, which will hear oral arguments on Dec. 1.

Besides the expedited hearing over the Texas case, this is the first major abortion case to come before the court since Amy Coney Barrett helped conservatives secure a 6-3 majority.

It is also the first time in decades that the Supreme Court has agreed to revisit the central tenet of abortion law in the United States — the “viability standard.”

This standard, established in the 1973 Roe v. Wade case, says that a woman has a constitutional right to an abortion until the point when the fetus could survive outside the womb, which most experts estimate to be around 24 weeks.

Joanna Grossman, the Ellen K. Solender Endowed Chair in Women and the Law at Southern Methodist University’s Dedman School of Law, said viability is the “one bright line” in abortion law.

“As long as an embryo or fetus cannot live on its own, the woman … gets to choose her own life and her own health and her own preferences over the life of a dependent fetus,” Grossman said. “But after viability … it’s less clear that she should be able to choose herself over that other entity.”

Over the years, the court has ruled that states can restrict abortion pre-viability only if it does not place an “undue burden” on women seeking the procedure. That “undue burden” standard was upheld by the Supreme Court in another Texas case, Whole Woman’s Health v. Hellerstedt, in 2016.

“You can’t have pre-viability bans on abortion,” said Grossman. “You can burden it in these various ways, but you can’t flat out ban pre-viability abortion.”

But that’s exactly what Mississippi’s 15-week abortion ban does and the court has said it will take this opportunity to consider the constitutionality of pre-viability bans. Abortion opponents have long argued that viability is an arbitrary standard and tried to draw the line at other phases of pregnancy — when a fetus can feel pain or when it develops cardiac activity, for example.

Pojman, with the Texas Alliance for Life, says the court should ban abortions based on “when the unborn child comes into being — that’s fertilization.”

If the Supreme Court decides to overturn the viability standard, it’s not clear what, if any, new standard they might set. In 1992, the Supreme Court ruled in Planned Parenthood v. Casey that “there is no line other than viability which is more workable.”

What would come next

Amy Hagstrom Miller says she doesn’t like to imagine a world without Roe v. Wade. But a map on her wall outlines that very reality.

“It’s been part of my work for a couple of years now to look at the map and say, which states are safe, which states aren’t safe, which are kind of like ‘who knows?’” said Hagstrom Miller, the founder and CEO of Whole Woman’s Health, which operates four abortion clinics in Texas.

Texas would almost immediately become one of the states that isn’t safe by Hagstrom Miller’s metric. In 2021, legislators passed House Bill 1280, which would be triggered if the Supreme Court “wholly or partly” overturns Roe v. Wade. It would make performing an abortion a felony in Texas 30 days after the Supreme Court’s decision.

In addition to criminal penalties, the attorney general can sue anyone who performs, induces or attempts an abortion for at least $100,000 per abortion. The law includes a narrow exception to save the life of the mother — but not for rape, incest, fetal abnormalities or other circumstances.

“The Texas law would become whatever the Supreme Court decides is permissible under the Constitution,” said Pojman, who helped draft and lobby for the bill.

He noted that the trigger law relies on what he calls “conventional enforcement,” by state officials, rather than the legal loophole that Texas legislators sought to exploit with the six-week ban.

Texas is one of 12 states with one of these “trigger laws,” according to the Guttmacher Institute, and one of 26 states that is certain or likely to ban abortion quickly if that power is returned to the states.

Neither Pojman or Hagstrom Miller expect that the end of Roe will mean the end of the abortion debates in Texas. If the trigger law goes into effect and outlaws abortion in Texas, both said they expect that to generate legal challenges. But Hagstrom Miller said losing the Supreme Court’s support for abortion as a constitutional right would be a significant blow.

If Roe is overturned, women will continue to seek abortion care, said Hagstrom Miller, but they will be forced to look to illegal methods or go out of state, creating what she called “two Americas.”

“The abortions that we provide are the same procedure, with the same safety outcomes everywhere in the country,” she said. “But how you get an abortion in a place like Maryland or Virginia or Minnesota is night-and-day different from a place like Texas or Mississippi or Louisiana.”

She worries most about the low-income women, adolescent girls and undocumented immigrants they serve who cannot easily travel out of state to obtain an abortion. The Guttmacher Institute analysis shows that Texans would have to drive an average of 542 miles to either New Mexico or Kansas to seek an abortion if Roe v. Wade was overturned. That’s something that many women have been doing since Abbott signed SB 8 into law.

Pojman said he hopes that’s not the option women choose.

“It breaks my heart to hear stories about women going out of state for abortions, because I suspect they may not be aware of the tremendous resources that Texas makes available to women with unplanned pregnancies,” Pojman said. “If they knew about those services, my hope would be they would not be seeking abortion at all.”

He pointed to historic investments in the state’s Alternatives To Abortion program, which is set to receive $100 million over the biennium. A Texas Tribune analysis found little data or transparency around this program, which grew twentyfold in just one budget cycle.

Beyond the Supreme Court

In September, Hagstrom Miller and other abortion providers met with Vice President Kamala Harris to discuss the current restrictions on abortion access. She said Harris reminded the providers that there are two branches of government beyond the courts.

In September, the U.S. Department of Justice sued to block Texas’ restriction on abortions around the six-week mark. The same month, in response to Texas’ new law, the U.S. House of Representatives passed the Women’s Health Protection Act.

The legislation would protect the right to get or provide an abortion pre-viability and nullify many of the restrictions states have imposed in recent years. It would also allow for abortions post-viability to protect the life of the pregnant patient.

NPR called the bill’s passage in the House “largely symbolic” considering the unlikelihood that it would survive the current U.S. Senate.

But the makeup of the Senate could change after the midterm elections next year. Experts and Supreme Court watchers note that the court is likely to issue a decision on Dobbs v. Jackson next summer, just a few months before voters go to the polls. A November Washington Post/ABC News poll found that 60% of Americans believe Roe v. Wade should be upheld, a statistic the Post said has been consistent since at least 2005. And 65% of respondents said the Supreme Court should strike down Texas’ latest restriction.

Pojman, with the Texas Alliance for Life, said he doesn’t think anti-abortion lawmakers in Texas have had to worry about that on the state level, particularly as the GOP-led redistricting process is underway.

“Republicans were very confident that they were going to get districts that they could run in and be reelected successfully,” Pojman said. “That meant they were safe to do what they wanted to do.”

Disclosure: Planned Parenthood and Southern Methodist University have been financial supporters of The Texas Tribune, a nonprofit, nonpartisan news organization that is funded in part by donations from members, foundations and corporate sponsors. Financial supporters play no role in the Tribune’s

Photo: Barriers surround the Supreme Court ahead of planned demonstrations regarding abortion in Texas in Washington, D.C., on Nov. 1, 2021. Credit: Eric Lee for The Texas Tribune

BY ELEANOR KLIBANOFF with Texas Tribune.