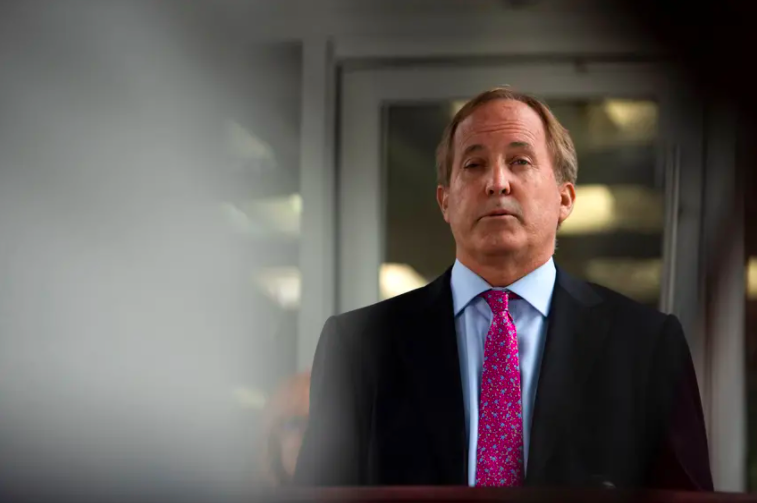 With the candidate filing deadline behind them, the attorney general’s challengers jockey to establish themselves as best person to unseat him.

Four years ago, Republicans watched closely to see if Attorney General Ken Paxton — who had been battling a high-profile securities fraud indictment — would draw a last-minute primary challenger as the candidate filing deadline loomed for the 2018 primary.

But despite his apparent vulnerability, Paxton ran unopposed in his party on his way to a second term.

This election cycle, things are different. Paxton is facing what is shaping up to be the biggest, most contentious fight among Texas Republicans next year, with the fate of the state’s top law enforcement official on the line. He has attracted three primary foes who are well known in Texas politics, a lineup that was finalized when candidate filing closed Monday evening for the 2022 primary. They are Land Commissioner George P. Bush, former Texas Supreme Court Justice Eva Guzman and U.S. Rep. Louie Gohmert of Tyler.

The GOP candidates are aligned in their mission to remind voters of Paxton’s ongoing legal problems — which this time include an FBI investigation into claims of malfeasance in office — while jockeying to distinguish themselves as the best person to unseat Paxton.

But armed with the endorsement of former President Donald Trump, Paxton has countered that his GOP foes are power-hungry opportunists who would not be able to fight the Biden administration as he has. He continues to express confidence that he can avoid a runoff in the March 1 primary despite the intraparty tension.

“We’re still above 50% in our polling,” Paxton said in a radio interview Friday, describing himself as “hopeful” he can win the GOP nomination outright. “I think I definitely, at this point — I’ve got a really good chance to continue to be successful in pushing back on the Biden administration and taking on the issues, these pro-life issues. The things that Texans want, we’re doing.”

Paxton’s campaign said he was not available for an interview for this story.

There has not been much public polling of the primary, but what has been released has been generally consistent: Paxton has a wide lead, with Bush a distant second and easily the best-known of the challengers — given his status as a member of one of Texas’ most famous political dynasties. Faced with name-ID challenges, Guzman has been running TV ads highlighting her biography. Gohmert joined the race late enough that he has yet to be polled.

In an October poll by The University of Texas/Texas Tribune, Paxton had the support of 48% of Republican primary voters, with Bush in a far second at 16%. In that poll, which was conducted before Gohmert jumped in the race, 27% of voters still had no opinion on whom they’d support. A November poll by The Dallas Morning News/ University of Texas at Tyler had 46% of GOP primary voters supporting Paxton and 32% supporting Bush.

Paxton has considerable distractions as he tries to recapture his party’s nomination. He has been fighting securities fraud charges since his first months on the job in 2015, and more recently, he came under FBI investigation after former top deputies — who are well respected in conservative legal circles — alleged he abused his office to help a wealthy donor. He has denied wrongdoing in both cases, and his office released an internal report in August that cleared him of the accusations in the FBI matter. The report was met with deep skepticism.

The FBI investigation came after Paxton’s 2018 reelection, when he avoided primary opposition but defeated a Democratic challenger, Justin Nelson, by only a small margin.

Paxton’s primary opponents agree that he lacks the integrity to be attorney general and could lose the seat to Democrats if he is the nominee again. That is especially true of Gohmert, who has been warning that it would be virtually impossible to remove Paxton from the November ballot if he wins the primary and then is indicted.

But the challengers are also looking for ways to distinguish themselves from one another. Paxton, Bush and Gohmert have all vied for Trump’s support, with Paxton receiving the coveted endorsement in June. Gohmert and Paxton are also vying for the same conservative voters who are further right than the establishment GOP. Bush and Guzman appear to be fighting over traditional, pro-business Republicans.

“The problem for those who are trying to unseat Paxton is that they’re essentially competing for the same voters. If the primary message they’re trying to convey is ethics and integrity, then the question becomes ‘Who should the voters support?’” said Jennifer Clark, a political scientist at the University of Houston. “You have to present a positive case for what you would do better and what you would do differently.”

Clark said the challengers will have to distinguish themselves from Paxton on issues, which may be difficult because Paxton has focused on key GOP political themes like investigating voter fraud and suing the federal government for overreach. All three challengers say they have the legal chops to fight off the federal government, but Bush, Guzman and Gohmert have expressed reservations with the strategy that Paxton took for his lawsuit to overturn the 2020 presidential elections.

“Their challenge is to distinguish themselves on a certain area that has been neglected that the attorney general should more strongly advocate,” Clark said.

Guzman has played up her legal experience as a member of the Texas judiciary for over two decades. In the process, she has hammered Bush over the fact he classified his law license as inactive from 2010-20.

“You can’t take the fight to the Biden administration with a law license that you just activated,” Guzman said in an interview.

Bush has downplayed the inactive law license, saying he has plenty of legal experience as a former federal judge clerk and private-practice attorney and that he puts it to use every day at the General Land Office. At the same time, he has hit back at Guzman, suggesting she lacks the executive experience he has as the head of a state agency.

“The thing about Eva is that she’s never run anything, in the private sector or in the public sector,” Bush said during a Texas Tribune Festival panel in September. “I have 800 full-time employees. She wants to talk about executive leadership — I’m more than happy to have that discussion.”

But Clark, the political scientist, said Bush and Guzman are both appealing to the Republican establishment and could be pulling voters from each other without making much of a dent against Paxton, who appeals to more conservative Republicans.

Bush’s main pitch is that he would remove the stain of controversy from the attorney general’s office.

“Throughout this tour, Democrat or Republican, a lot of folks say ‘Well, I either don’t trust Ken Paxton to hand over this file for this case, or he hasn’t bothered to reach out to me,’ and that’s a problem,” Bush said during a tour of border cities last week. “That’s simply what my campaign is about. It’s not exotic. It’s not sexy. It’s just about bringing good government back to this agency that’s been broken for way too long.”

Then there is Gohmert, who is running as a conservative in the mold of Paxton without the legal baggage. That was the lane occupied by state Rep. Matt Krause of Fort Worth, who was running in the primary until he dropped out last month and instead launched a campaign for Tarrant County district attorney. Krause said he would back Gohmert for attorney general.

Gohmert has wasted little time shaking up the primary, tossing out claims about how much legal jeopardy he believes Paxton is in and casting doubt on the sincerity of Trump’s endorsement of Paxton. Gohmert has said he spoke with Trump on the phone in November, and the former president told him he endorsed Paxton only when he thought Gohmert definitely was not running for attorney general.

“[Trump] said, ‘I won’t do more than I’m already committed to do’” for Paxton, Gohmert told the State Republican Executive Committee earlier this month.

A Trump spokesperson did not respond to a request for comment on Gohmert’s account of the call. But the former president hosted a fundraiser for Paxton on Thursday at his Mar-a-Lago club in Florida, reiterating his support for the incumbent.

Paxton raised over $750,000 from the event, according to a campaign aide. And on the latest campaign finance filing, covering Sept. 7 through Oct. 19, Paxton saw a significant cash bump, raising $541,000 and surpassing Bush in direct contributions for the period.

But Bush has been the fundraising leader on the series of reports that the candidates were required to file as a result of the three special legislative sessions dating back to July. Bush raised $860,000 on those filings, while Paxton took in $652,000 and Guzman $550,000.

Gohmert has not been a candidate long enough to have to file a campaign finance report, but his entrance came after he said he met a self-imposed goal to raise $1 million in 10 days.

Gohmert received not only Krause’s backing but also that of Krause’s No. 1 donor: state Rep. Mayes Middleton of Wallisville. Middleton, chair of the conservative Texas Freedom Caucus, had committed over $300,000 to Krause’s bid for attorney general.

The race has also attracted a lineup of Democrats. They include Joe Jaworski, a Galveston lawyer and former mayor of the city; Lee Merritt, a nationally known civil rights attorney from Plano; Rochelle Garza, a former lawyer for the American Civil Liberties Union from the Rio Grande Valley; and Mike Fields, a former Republican judge on the Harris County Criminal Court.

Photo: Attorney General Ken Paxton faces three challengers in the Republican primary. It’s his first election since reports surfaced that he was under FBI investigation for abuse of office. Credit: Mark Felix for The Texas Tribune

BY PATRICK SVITEK AND JAMES BARRAGÁN with Texas Tribune.