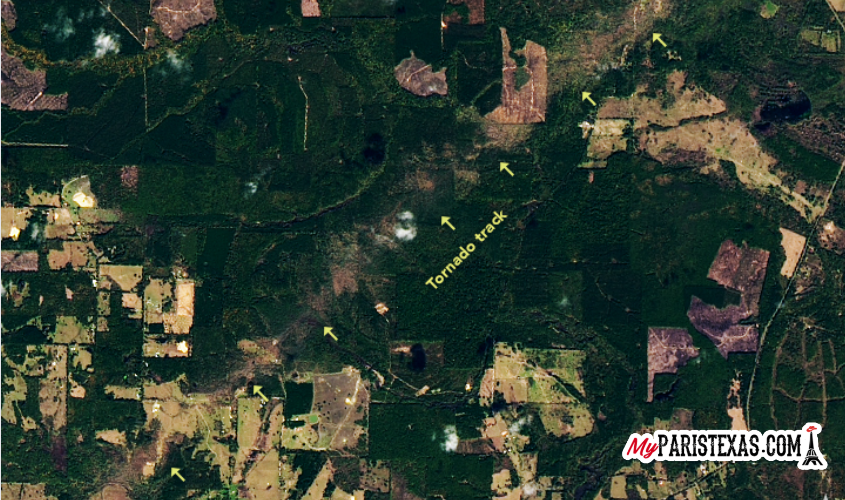 Among the most severe was a strong EF4 tornado that touched down near Clarksville, Texas, at 6:15 p.m. local time and left a wide line of damage as it moved toward Idabel, Oklahoma, over the course of an hour. On November 5, 2022, the Operational Land Imager (OLI) on Landsat 8 acquired this natural-color image (right) showing the damage track in Red River County, Texas. For comparison, the OLI image on the left shows the same area on October 20, 2022, prior to the tornado. Signs of damage are most visible where the tornado tore through forests (dark green). The track is more difficult to see in pastures and farmland (light green).

According to the National Weather Service’s Damage Assessment Toolkit, the tornado produced winds that reached speeds as high as 170 miles (270 kilometers) per hour. The twister destroyed large numbers of homes, peeled the roof off a factory, flattened a church, and snapped and uprooted trees along a track that extended 58 miles (93 kilometers). Dozens of people were injured. Idabel, Oklahoma, (visible in this broader image) was among the hardest-hit towns, with at least 100 homes and businesses taking damage.

After previous storms, scientists with NASA’s Earth applied sciences disasters program have worked with National Weather Service offices to locate satellite images that can aid in damage assessments after tornadoes touch down.