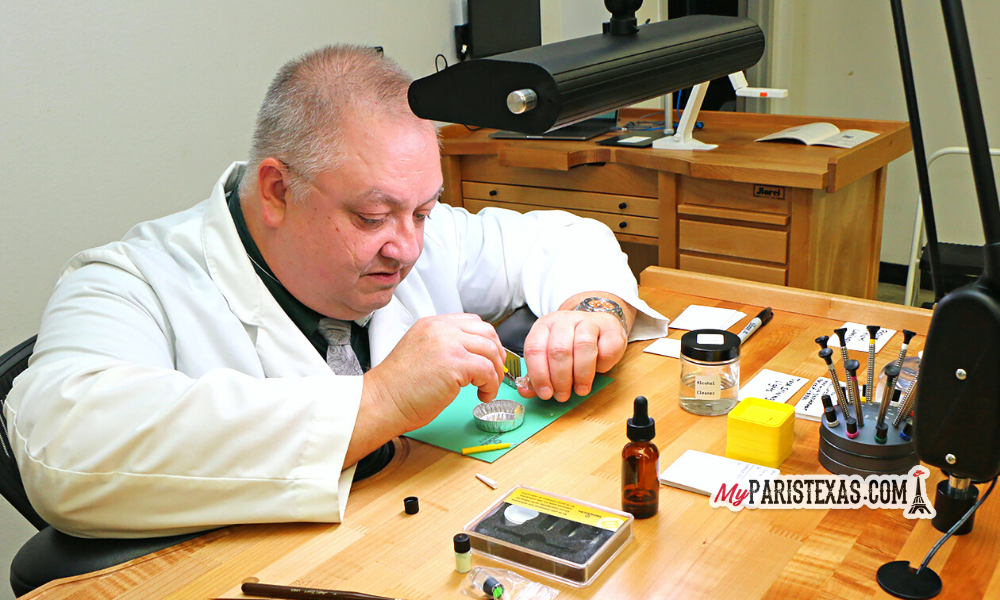 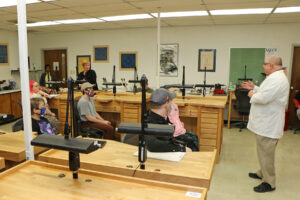 Submitted | PJC drama students involved in “These Shining Lives” attended a presentation by Watchmaking Instructor Stan McMahan to learn more about the industry and techniques of painting radium on watch dials in the 1920s.

Centering on four young women in the 1920s working for Radium Dial Company in Ottawa, Ill., the play follows Catherine, Charlotte, Frances, and Pearl as they paint luminous watch faces. At the time, radium was thought to be medicinal and cure all kinds of maladies. Six years later, however, every girl working on the watches had health problems.

“The script almost has a musicality; it’s very rhythmic,” said PJC Drama Instructor and play director Robyn R. Huizinga. “The main character says it’s not the light at the end of the tunnel before you can rest, it’s that you have to tell your story and then you can rest. The women continue to live on by telling their story and influencing labor law and working conditions. So we still are feeling the ripple effects through time to the present.”

The students received an overview of the period from History Instructor Micha Flowers and Watchmaking Instructor Stan McMahan who gave historical and technical perspectives on the industry.

“We talked of what happened leading up to this event and why it was a significant factor in the development of U.S. labor laws,” Flowers said. “We owe a lot to their sacrifice. At the time, they had no idea as they too on a defense contractor that their suffering would lead to change. Sure enough, it did.”

“Luminous dials were developed for aircraft cockpits so military pilots could fly at night,” McMahan said. “At the time, radium was thought to be safe. People even drank radium water.”

McMahan shared a 1959 edition of “American Horologist and Jeweler” in which scientists were still stating that radium was safe.

Explaining that the women would have been paid by the completed dial, McMahan explained that the material dried out quickly. Initially, brushes were dipped into bowls of water, but this was expensive, and one supervisor hit on the idea of licking the brush to keep it wet enough to continue painting without waste. He demonstrated the technique and provided a live demonstration to show the tiny size of the brush and dials.

Over 4,000 factory workers were exposed to toxic and deadly levels of radium poisoning and the play shares the story of how the real-life women took their company to court and achieved a long-lasting victory over corporations with poor workplace conditions and worker’s compensation that is still in effect today.

“Eventually, Catherine finds a doctor willing to tell her the truth. She and all the others have toxic levels of radium poisoning,” said Huizinga. “Their condition is fatal. Instead of fading into the background, Catherine and her friends decide to risk their names, images, and reputations and take the watch company to court.”

“These Shining Lives,” written by Melanie Marnich, runs Thursday through Saturday, March 3-5 at 7:30 p.m., and at 2:30 p.m. on Sunday, March 6 on the Duane Allen Stage in the Ray E. Karrer Theater. Tickets are $15 general admission, $10 for senior adults and students, $5 with donation of a new children’s or youth book for local charities, and free to those with a current PJC ID. Tickets are available by cash or check on at the door. The play includes some adult language. For more information contact pjcdrama@parisjc.edu.