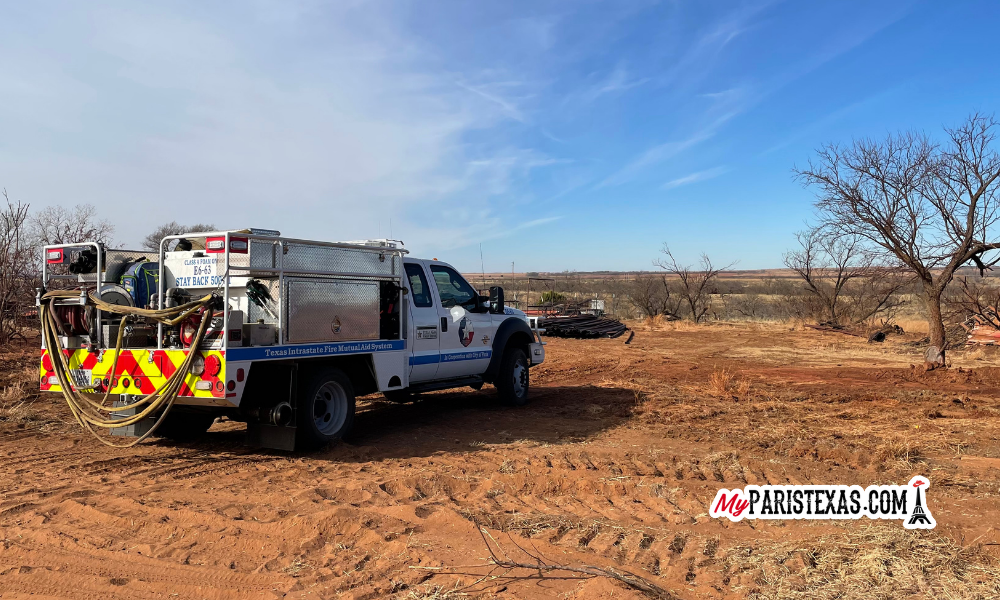 “We protected a home on the Indian Creek Fire just West of Memphis, Texas, while working with local Fire Departments, Texas Forest Service and some firefighting aircraft that we had available,” PFD Captain Matt Barbee said, referencing one incident while the two were deployed. “The home and ranch operation was saved with only a little damage to some fences and power poles. We ran into the residents a few days later at a store in Childress and they were very appreciative and thankful for us being there.”

Through the Texas Intrastate Fire Mutual Aid System, PFD Captain Drew Boren said the two aided the Texas Forest Service with fire containment and extensive mop-up of the about 285-acre fire, which took about five hours to contain. Also, he said, there was an air attack to help stop the fire from spreading to a structure.

Above, a single-engine air tanker, mobilized by Texas A&M Forest Service, drops retardant on the Indian Creek Fire in Hall County on Feb. 19, 2022.

Barbee said he knows when the state deploys TIFMAS resources, “it’s going to be for a good reason.”

“When we get there and start working with the locals you can tell they appreciate the extra help we bring in manpower, resources and knowledge,” Barbee said. “It also allows the local fire departments a chance to take a break when they are overwhelmed with numerous fires, both large and small.”

Boren said he’s glad Paris Fire Department is a part of TIFMAS, “so we can lend a helping hand, whether it be for wildfire deployment or an all-hazard deployment for a natural disaster. Plus, the same help would be lent to Paris and our surrounding community if needed through TIFMAS.”

Barbee said weather conditions in the west can change drastically day to day, “and even hour to hour.”

“It can be much colder and windier,” he said. “With no trees to speak of and the open terrain, fires are able to spread much faster and cover a larger area than we are used to fighting here in East Texas.“ 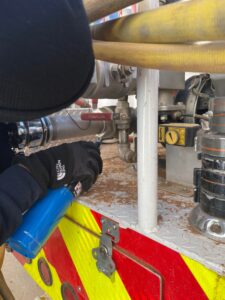 Thawing out the pump after temperatures dropped below freezing while Paris Fire Department firefighters were deployed in West Texas through TIFMAS.

Boren said overnight, the weather was predicted to be about 36 degrees, however, temps reached 16 and they had to thaw out their pump.

Barbee said he enjoys TIFMAS deployment because they are able to work with firefighters from other departments across the state of Texas.

“Some (firefighters) you know from previous assignments and some you meet and work with for the first time,” Barbee said, “but you always come away making new friends in the fire service and gain some knowledge and experience.”