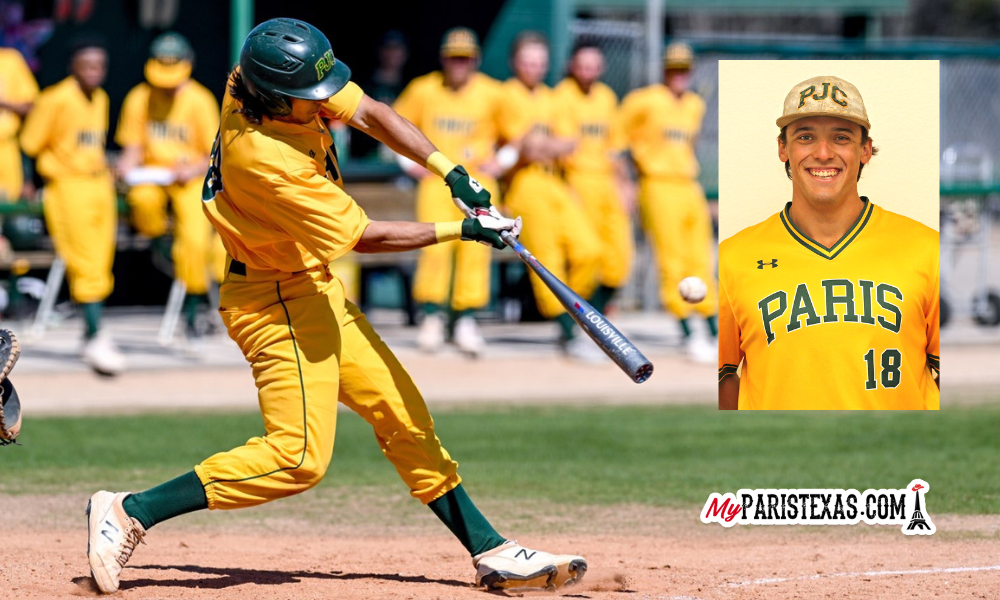 Beau Brewer of McKinney, Texas, who has finished up a stellar sophomore year at Paris Junior College, was drafted in the 19th round by the New York Yankees.

“I give a big shoutout to Paris Junior College. I owe my career and my life to ya’ll,” said Brewer. “It’s been a blessing to have this opportunity to play professional baseball. Coming out of high school I didn’t have much. Coach [Clay] Cox gave me the opportunity to play baseball for PJC; now I’m here playing for the Bananas and now I’m about to start my professional baseball career. You never know what life is going to hold for you – just keep on grinding.”

“We are extremely excited for Beau and the opportunities that lie ahead for him in professional baseball,” said PJC Baseball Coach Clay Cox. “He’s earned every bit of this. He came in two years ago, bought in, put in the work and now he is being rewarded for that. He has a tireless work ethic and is one of the most selfless teammates and best leaders I’ve been around on a ball field. We can’t wait to see him in pinstripes.”

A 2020 graduate of McKinney Boyd High School in McKinney, Texas, Brewer was a standout in the classroom as well, including two years in Phi Theta Kappa, the two-year college honor society and named to the President’s Honor List for academic excellence three times.

Brewer was a 2021 Paris Junior College Homecoming nominee and crowned 2022 Mr. PJC. He also won the Distinguished Service Award at the Spring 2022 graduation, the highest honor a PJC student may receive.

“Beau was a standout at PJC on campus, in the classroom and on the baseball field,” said Dr. Pam Anglin, PJC President. “He is an outstanding young man who will do well and we are excited for Beau today. We wish him the very best with the New York Yankees.”

Since graduation, Brewer has been playing with the Minor League Baseball team Savannah Bananas and was named the 2022 Coastal Plain League All-Star Hitter of the Game. He had signed to play with Kansas State prior to being drafted by the Yankees.