LOOK UP: Planet parade to grace the dawn sky on Friday 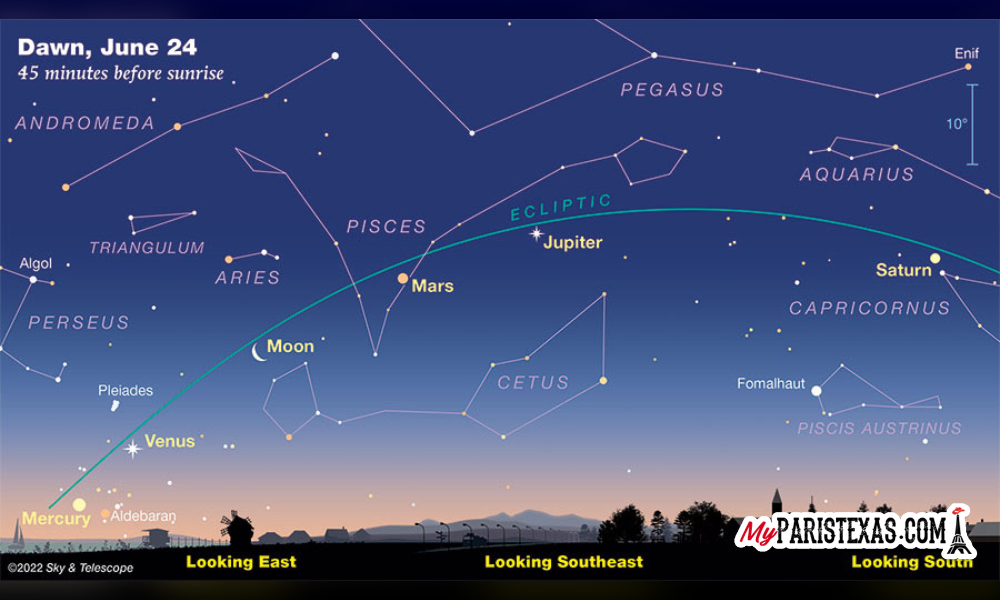 All five naked-eye planets will line up in the dawn sky in June. Not only that, they’ll also be in their proper order from the Sun.

The delightful view of all five naked-eye planets will greet early risers throughout the month of June. While seeing two or three planets close together (in what’s known as a conjunction) is a rather common occurrence, seeing five is somewhat more rare. And what’s even more remarkable about this month’s lineup is that the planets are arranged in their natural order from the Sun.

Throughout the month of June, shortly before the Sun rises, viewers could see Mercury, Venus, Mars, Jupiter, Saturn — in that order — stretching across the sky from low in the east to higher in the south. Mercury will be tougher to spot: Early in the month, viewers will need an unobstructed eastern horizon as well as binoculars to potentially see the little world. As the month wears on, Mercury climbs higher and brightens significantly, making it easier to see, and thus completing the planetary lineup.

The last time the five naked-eye planets were strung across the horizon in sequence was in December 2004. But this year, the gap between Mercury and Saturn is much shorter.

According to Sky & Telescope magazine, the planetary lineup this morning is even more compelling. To begin with, Mercury will be much easier to snag, making the five-planet parade that much more accessible. And you’ll have about an hour to enjoy the sight, from when Mercury pops above the horizon to when the rising Sun washes it out of the sky. But the real bonus is the waning crescent Moon positioned between Venus and Mars, serving as a proxy Earth. By this time of month, the planets are spread farther across the sky — the distance between Mercury and Saturn will be 107°.

If it’s cloudy on the dates of note, you still have all the mornings in between to take in the view of the five naked-eye planets adorning the southeastern horizon. Just make sure you set your alarm and wake up on time.

PHOTO: At dawn on June 24th, the crescent Moon joins the planetary lineup. It’s conveniently placed between Venus and Mars, serving as a proxy Earth. Click on the image for a higher-resolution version of the chart.
Sky & Telescope illustration