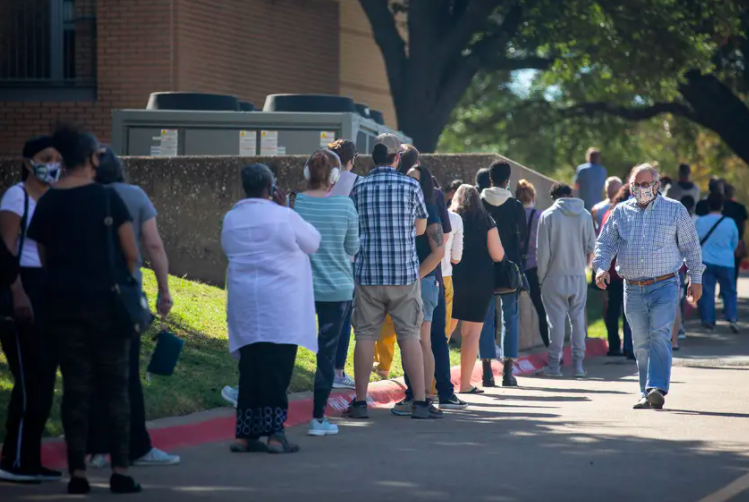 GOP leaders on Friday approved shifting $4 million in emergency funds for the Texas secretary of state’s office to create an “Election Audit Division” at the agency, which will spearhead county election audits as required by the state’s new election law set to take effect next month.

In a Nov. 18 letter to Patrick and Phelan, Abbott said the emergency shift in money — which is coming from the Texas Department of Criminal Justice — was necessary because the secretary of state’s office “does not currently have the budget authority to adequately accomplish the goals sought by the Legislature.”

Friday’s news comes as the secretary of state’s office has a “full forensic audit” of the 2020 election underway in four of Texas’ largest counties: Dallas, Harris, Tarrant and Collin.

It also comes after the GOP-controlled Legislature passed a new election law this summer that further tightens the state’s election rules with a host of changes, such as a ban on drive-thru voting and new rules for voting by mail.

The new law, which is facing legal challenges, also requires the secretary of state’s office to select four counties at random after each November election and to audit all elections that happened in those counties in the prior two years. Two of the counties that undergo the audit must have a population of more than 300,000, while the other two must have a population lower than that.

In a statement later Friday, the secretary of state’s office referenced both its 2020 audit and future audits required under the new state law, saying that the latest funds would be used for “additional staff to oversee audit activities,” such as “verifying counties’ removal of ineligible voters from the rolls … and ensuring compliance with state and federal election laws.”

There is no evidence of widespread fraud in Texas that would have changed the outcome of the 2020 presidential election. Former President Donald Trump lost his reelection bid, but in Texas, he defeated President Joe Biden by 6 percentage points. A top election’s official in the secretary of state’s office earlier this year called the 2020 election “smooth and secure” in Texas.

Still, Abbott has fielded pressure from Trump and other Republicans to prioritize a measure at the Legislature that would provide a process for party officials to trigger election audits. That pressure has come as Trump and other Republicans have repeatedly cast doubt on election results in other states that handed Biden his 2020 victory, despite no evidence of substantial fraud and federal courts rejecting numerous legal claims challenging the election results.

Texas’ new secretary of state, John Scott, briefly represented Trump in one of those lawsuits in Pennsylvania.

The last special legislative session ended in October without lawmakers passing election audit legislation after Abbott did not include it as a priority.

Hours after Trump’s initial call on Abbott to act on election audit legislation, the secretary of state’s office announced its audit of the 2020 election in those four Texas counties, though it was unclear what exactly prompted the move.

The scope of the effort, according to the office’s documentation, includes measures that counties are already required to take after an election. A second phase, set for “spring 2022,” will include reviewing records of voting machine accuracy tests, rosters for early voting, forms detailing chain of custody for sealed ballot boxes and other election materials maintained by the counties.

More recently, Scott has called that four-county audit his top priority, though he has said there’s no question Biden is president and that he has “not seen anything” to suggest the election was stolen.

Disclosure: Texas Secretary of State has been a financial supporter of The Texas Tribune, a nonprofit, nonpartisan news organization that is funded in part by donations from members, foundations and corporate sponsors. Financial supporters play no role in the Tribune’s journalism. Find a complete list of them here.

Photo: People wait in line to vote at Audelia Road Branch Library on the first day of early voting in Dallas on Oct. 13, 2020. Credit: Montinique Monroe for The Texas Tribune

BY CASSANDRA POLLOCK with Texas Tribune.