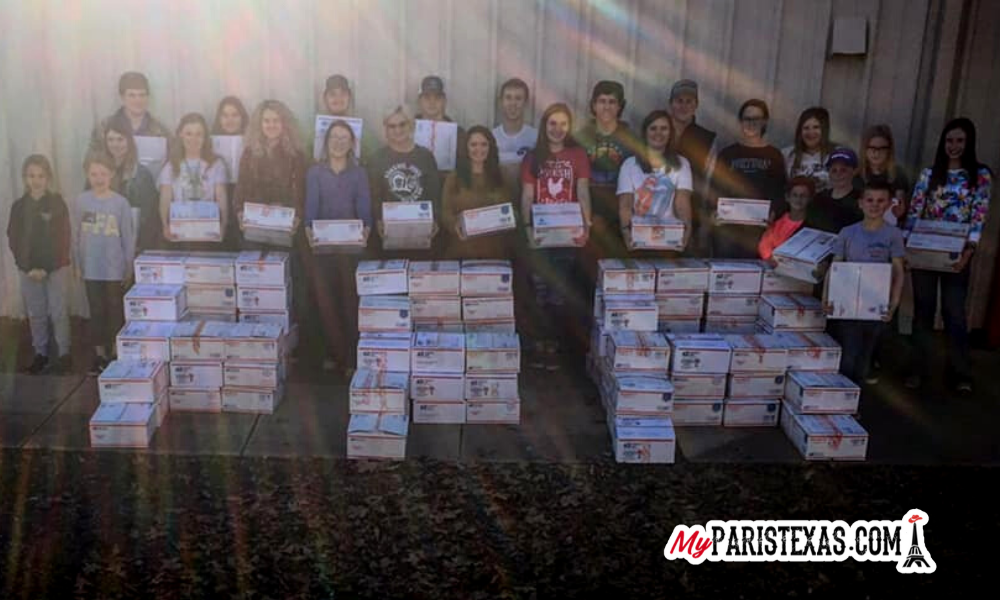 “We have a goal of 100 boxes between all of the chapters in Lamar County. But shooting for more,” said Sara Kiesler with Prairiland FFA when collecting the goods to send.

Kiesler explained that it all began when Huck Plyler started the Hucks Military Care Packages in 2016.

“Our Ag Science Teachers brought the idea up to our officer team as a service project to do during National FFA Week. After discussing it as a team, we decided that this is what we wanted to do as a collective group,” she explained.

With service being a core part of participating in the FFA, they wanted to give back to the military members that fight for them daily.

Kiesler also went on to explain that this project wasn’t just one that Prairiland students participated in; instead, it was a county project that all FFA students engaged in.

“Chisum, North Lamar, and Paris FFA programs are all apart of this project, and they are deciding within themselves how they want their schools to participate,” she said.

Prairiland ISD created a competition between the grades/classes to see who can bring the most supplies in so that they can put boxes together.

There are all different types of things that were included in the care packages being sent. From toiletry items, that are always a must for men and women serving overseas. Items such as toothpaste, shampoo, and conditioner, ibuprofen, deodorant, chapstick, and so forth.

“WOW….126 boxes packed in 3-hours for our soldiers deployed. These FFA kids did an amazing job. We wanna say thank you for all the donations, and hard work that these Chapters and FFA advisors put in for Huck’s project. They decided to make this as part of their project during National FFA week and we were so happy to team up with them,” said Hucks Military Care Packages on their social media page.

Your local FFA kids surpassed their original goal and are said to be ecstatic having been given the opportunity to give back to those that are surviving.

The Lamar County FFA chapters also donated all together $700 to Huck’s Military Care Package Project to help with shipping.

“We just want to say a huge thank you to everyone who donated,” said Kiesler.