An iconic jingle with a staple message of, “This is Sportscenter,” inspired a one-of-a-kind name for a unique local athlete.

Lacing ’em up to run it back

Although he has not been featured on the network’s various programs yet, Espn continues to work hard on his basketball game. Upon the close of another successful season on the gridiron, Espn took his talents back to the hardwood as he and the Chisum Mustangs gear up for another playoff run in basketball.

“Coach (Brian) Temple told me before the season started that he was going to need me to shoot and handle the ball,” Espn said. “He told me that he needs me to play good defense, too, and I’ve been working at it.”

After hearing his coach’s expectations, Espn quickly got to work. Even before the 2020 football season began, Espn and his teammates worked on their craft in both live competition and hours of practicing in the gym. Working to get better with people in his corner brings Espn joy and strengthens the team in several ways, too.

“I played basketball all summer with my teammates in the gym,” Espn said. “We’ve just been trying to get better every year, just like we’re trying to do in football. Everyone on this team has their role and knows their role. We all want to get better with our teammates, and everyone works on their game every day year-round.”

For Espn, he is well versed in what his role for the team is. By bringing his physicality to the table, Espn’s overall game benefits as do his teammates.

“I’m a really aggressive player, so I like being physical whether it is football or basketball,” Espn said. “It helps a lot to play physically in sports, and if I have to lay my body out there or whatever it may be, I’m willing to do it for my team.”

With a smaller and faster lineup on the court this year, Espn believes the Mustangs can make a good run into the postseason. Since the team gained more speed than that of last year’s quality team, optimism and belief are high.

“I think we can go a lot farther than we did last year,” Espn said. “We’ve got a lot more speed and as Temple has said, we are a guard-heavy team. We can use that to our advantage by shooting, driving to the basket, and defending better.”

Espn has picked up basketball nicely and, even though his skills increased, the sophomore does recall a forgettable jump shot he hoisted towards the basket at Prairiland High School.

“We were winning by a lot against a team in the Prairiland Tournament,” Espn said, while laughing. “I went into the game and, before I shot, my teammate Worm (Price) told me not to airball. But, that was exactly what I did when I shot an airball.”

Batter up! In the hole before making any form of field goals

Before he dribbled a basketball or put on any shoulder pads, Espn was exclusively on the diamond. Even though he has excelled in both basketball and football during his years as a Chisum ISD student, the seventh-inning stretch and dugout chants were more of Espn’s normal activities to partake in when he was younger.

“I used to only play baseball — that was the only sport I played,” Espn said. “Starting in middle school, I tried out for football and basketball. I figured I was kind of good at those sports, so I kept on playing.”

During his youth baseball playing days, Espn recalls a Sportscenter Top-10-worthy moment from one of his teammates. When an opposing travel baseball coach told his batter to launch the next pitch he saw into orbit, Espn’s teammate on the mound had other ideas.

“One time, I was playing travel baseball with me and my friends, and Jaelyn Lee was on the mound for us,” Espn said. “The opposing coach was talking a lot of stuff during the game and, getting towards the end of the game, the coach told his next batter to, ‘send it to the moon,’ but Jaelyn sat the kid down in three pitches.”

Espn hopes to help guide Chisum through another successful season, and the Mustangs will face Quinlan Ford at 6:30 p.m. tonight as the visitors. For more sports coverage, click here.

Volunteer firefighters are ‘in the position to save... 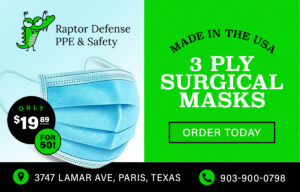